BANGKOK, Thailand -- Her Majesty Queen Sirikit has ordered the Bureau of the Royal Household to send rice and dried food to Buddhist monks who are travelling to stay at temples in the four southern border provinces during the three-month Buddhist Lent. 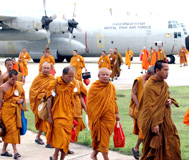 Gen. Napol Boontab, director of royally-sponsored projects, said that 350 monks travelled to stay at temples in Yala, Pattani, Narathiwat, and Songkhla to boost the morale of Buddhists in the strife-torn south.

Local Buddhist villagers now can go to make merit at a local temple because there are now monks living there to welcome them.

Some Buddhist monks had earlier abandoned temples in the three Muslim-majority southern provinces due to insurgent attacks on Buddhist monks.

Meanwhile, Phra Kru Adulnikomket, abbot of Wat Kuhapimuk in Yala, called for the government to continue using reconciliatory approaches to tackle unrest and use decisive measures to protect innocent people and to bring peace to the region.