Monks on a spirit raising trip

Narathiwat, Thailand -- Buddhist temples in the far South have beencaught in the crossfiresince the southern conflict flaredafresh in 2004. As a consequence, religious ceremonies in the three border provinces are subdued and thespirits of Buddhists living there dampened like never before. 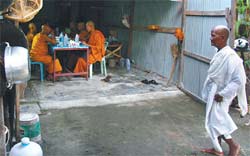 << Monks take their meal in a kitchen inside Wat Parimangkalawas in Narathiwat yesterday. Several hundred monks have volunteered to spend Buddhist Lent in the far South to raise the morale of local Buddhists. — INTELLECTUAL DEEP SOUTH WATCH CENTRE

The temple is home to only three monks and two nuns and is in Ban Paluru in Narathiwat's Sungai Padi district.

The district is in an area designated a red zone by the security forces, where insurgents are particularly active and security istight.

As darkness and silence quickly descended on the temple, the monks shut themselves away intheir living quarters on the night ofAsalaha Bucha.

This was in stark contrast to temples in other provinces which were bright with candlelight and buzzing with ceremonies to observe Asalaha Bucha Dayand the arrival of the Buddhist Lent.

However, the morale of the monks at the temple and villagers in the community around it was lifted by the arrival of four monks who arrived from other provinces.

The newcomers were among themore than 300 Buddhist monks from other regions of the country who plan to spend the three-month Buddhist Lent, which began yesterday, in temples in the Muslim-majority South to boost the spirits of local Buddhists.

A monk from Ratchaburi, who did not give his name, said he would apply the teachings of Lord Buddha to raise the spirits of the local community.

''Monks do not carry weapons to fight anybody,'' he said.

''We came here to provide support for the local people and to preserve Buddhism.''

A monk from Sa Kaew said he hoped his three-month stint at the temple would give him an opportunity to find out the root cause of southern unrest and tocome up with a solution.

But his primary concern was to make sure Buddhism remaineda beacon of hope for southern people in times of trouble.

After Lent, he planned to spend some time in Malaysia. ''There are Buddhists on the Malaysian side of the border,''he said. ''If I go there I will havea chance to learn how people of different faiths live together peacefully.''

Mrs Pornthip, a local villager, hailed the monks' arrival in the far South. Buddhists living near the temple were happy to have more monks around and to present them with alms - a traditional practice they had been deprived of since the violence broke out.

''We are not angry with them [insurgents]. Rather, we feel sorry for them, since one day the law of karma will make them pay for what they have done,'' saidMrs Pornthip. Her son was killed a few months ago in a drive-by shooting while delivering newspapers.