Bangkok, Thailand -- Theravada Buddhism in Sri Lanka has stepped forward. Tibetan Buddhism is ready to take the plunge. But the Thai Buddhist clergy still prefer to live in the Dark Ages when it comes to female ordination. 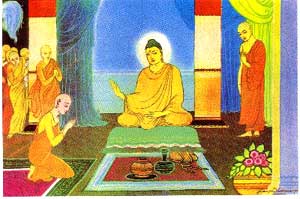 << The Buddha Himself allowed for the ordination of nuns. So what's the issue with the Thai Bhikkhu Sangha?

Ask the monks why, and they will come up with excuses we have all heard too many times before. It is simply technically impossible to ordain women as female monks or Bhikkhunis in Theravada tradition, they will insist.

The monastic rules demand that female ordination be presided over by male and female monks. Since the Bhikkhuni lineage in Theravada Buddhism died out a long time ago, it is impossible to re-establish the Bhikkhuni order again, they will explain. Feeling righteous as keepers of the monastic code, they will go on to patronisingly tell women to be satisfied with nunhood - despite the white-robed nun's status of servitude in temples and lack of support for women's spiritual life.

Some will even accuse women who seek Bhikkhuni ordination as being governed by greed. Others will tell women just to keep practising, regardless of monastic position, saying that essence comes before form.

If women still insist, they will be simply dismissed and told to go to Mahayana Buddhism in Taiwan, Korea, Vietnam or China for female ordination. The mutual understanding, however, is that they will remain outsiders to the Thai Sangha and never be accepted as equal to monks.

The women in Theravada Buddhist Sri Lanka and those who practise Tibetan Buddhism must have heard the same excuses from their monks. Yet, things are fast opening up in their traditions.

The Thai Sangha has simply snubbed the move.

In July this year, His Holiness the Dalai Lama expressed full support for the restoration of the Bhikkhuni order in Tibetan Buddhism. His Holiness also gave instructions on how to do it properly, and the need to embrace Bhikkhunis who practise Tibetan Buddhism but ordained in Mahayana traditions back into their own Tibetan order.

We still hear the same silence from our clergy.

Isn't it strange that while our monks tell women they should not seek status, they themselves fiercely insist on a status of National Religion for Thai Buddhism in the draft charter?

Buddhist Lent is a time for monks to be in deep contemplation. Instead of accusing those who disagree with their charter move, they should use this time to ask themselves why the clergy are facing a crisis of faith, and what should be done to make the clergy relevant again.

Actually, people are not asking much. We simply want monks to be living examples of the Buddha's teachings.

For when consumerism keeps pressuring us to compete and constantly acquire materials, fame and status, we want monks to show us that simplicity, giving of oneself and mindful conduct governed by loving kindness are, indeed, the keys to happiness.

In a society ridden with inequality and a lack of welfare services for the poor, we also want the Sangha to fill the gaps.

I, for one, believe that only when the clergy open up to these needs will they be open to female ordination. For compassion is self-generating. The more you do it, the more it grows on you, opening your heart to see the complex layers of bias which block change, and encouraging you to look for ways to help more.

If the clergy help with female ordination, they will find that the Bhikkhunis' active role in social services will greatly help the Sangha as a whole to serve society better, so it becomes relevant again.

When the clergy's choice is not the path of giving, but that of power and self-aggrandisement, the problem does not lie with women who seek ordination. It lies with the clergy themselves.