BANGKOK, Thailand -- Few would have thought that a painting would have the power to shake the foundations of modern-day temple life in Thailand, a country which prides itself as a center of Buddhism. 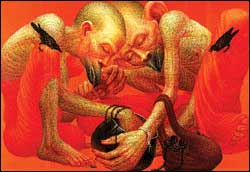 But before painter Anupong Chanthorn started working on his masterpiece, Bhikku Sandan Ka (Monks With Traits of a Crow), he spent time seeking meaningful messages in Buddhist texts. That diligence paid off when the painting bagged the country's most prestigious national art award in September.

Since then, the painting's powerful message has not only elevated the painter to the ranks of well-respected national artists, but also sparked an open national debate on how much monks, who symbolically represent a fundamental part of Buddhism, can and should be criticized.

The painting, composed using a yellow cord traditionally worn by Buddhist monks, portrays the painter's disagreement with the immoral behavior of some clergy members. It shows two monks with pointed and sharp mouths resembling a crow's beak squatting and facing each other on the floor with crows looking over their shoulders.

Shortly after the painting was displayed at the annual art exhibition in Bangkok, a group of Buddhist monks staged a series of emotional protest rallies which served to stimulate further debate. Late in September about 100 laymen and monks from two major Buddhist universities protested in front of the Silpakorn University campus where the exhibition was held.

They demanded the university withdraw the award given to the painter and remove the painting from the exhibition because it was insulting to the Buddhist clergy. Angry protesters carried Anupong's picture decorated with wreaths, and monks who joined the protest chanted a Buddhist prayer that is traditionally used at funerals. Civilians in the group later cremated the picture.

Protest leader Satian Wibhroma, a member of a Buddhist group known as the People's Network to Protect the Nation, Religion and the Monarchy, accused the painter of insulting Thai monks as a whole. While crows in the painting represented greedy and evil spirits, amulets in the alms-bowls indicated superstitious beliefs which are against Buddhist teachings, Satian said.

The painting also associated monks with immoral behavior and would adversely impact Buddhism in the country if put on public display, he added. Anupong dismissed such claims. He said that through the painting he intended to present certain hard facts about modern-day Buddhism in Thai society. One reality was that some people became monks only to take advantage of the religion which, he said, hurt many Buddhists.

Anupong said that Buddhist texts faithfully reproduced the Buddha's mention of different types of immoral behavior that may afflict monks, including the “monks with traits of a crow” phrase he used in titling the portrait. "I intend to use this painting to bring back good conscience in people," he said in an interview.

An estimated 94% of the Thai population follows Theravada Buddhism. Although monks are traditionally beyond criticism, corruption and sexual scandals involving temples and individual monks reported in the local media in recent years have slowly changed public attitudes.

"Too many of the 250,000 to 300,000 monks in this country do not observe even the most rudimentary precepts required of lay Buddhists - let alone the 227 precepts that those who take up the saffron robe are supposed to observe," said a recent editorial in The Nation newspaper.

"Buddhist temples used to be centers of learning, and monks were the guardians of our cultural heritage, but many temples have turned into dens of iniquity. The failure to reform Buddhism and keep it up to date with the drastic social and economic changes has not only resulted in the religion's diminished influence as a force for good but also contributed to corruption and social decay," the editorial said.

Public reaction to the painting was mixed. Some government officials and Buddhists said the painting, regardless of what it attempts to convey, could hurt the feelings of the average Thai Buddhist. But many leading intellectuals, artists and an overwhelming number of anonymous writers on the Internet defended the painting for its honest message.

Some said monks should be more open-minded in listening to frank criticism. Different opinions surfaced among monks too. The revered monk Phra Payom Kalayano said the painting was an attempt by the painter to express his concerns to society. "Monks who are the subject of criticism should recognize facts, as Lord Buddha taught us to accept criticism from people," he said.

The uproar was the second time this year that normally moderate Thai society has been confronted with a high profile case of religious extremism. Earlier this year a group of monks and laypeople staged a campaign demanding that the new constitution declare Buddhism as the state religion. The campaign was aimed at the Constitutional Drafting Assembly, which was set up after last year's military coup to write a new charter.

Buddhism has never been officially declared Thailand's national religion. The previous constitution mentioned that both the king and the government traditionally upheld and supported all religions represented in the kingdom, including a significant Muslim minority. The assembly rejected the demand and retained the same language in the newly-drafted constitution as in previous constitutions.

Despite a month of rallies and publicity-generating hunger strikes, the campaign was not well-received by the majority of Thais and was criticized for being politically motivated. A poll taken by a Bangkok-based organization showed that about 80% of Thais who participated in the survey disagreed with the protesters' demands.

The campaign died down after Queen Sirikit expressed her concern over the issue in her birthday speech in August, saying that she disagreed with having the charter enshrine Buddhism as the national religion. She also said that she did not want Buddhism to be involved with politics.

Meanwhile, Anupong seems to have many allies. Silpakorn University and members of the panel of judges for the art awards recently released a statement standing by their decision. They refused to withdraw the painter's award and said that they would continue displaying the painting in future exhibitions.

Committee member and senior artist Kiartsak Charnnaroth said that those who disagreed with the painting had the right to express their opinion, but such criticism would not in any sense reduce the value of the painting. "I see moral courage in telling society the truth here," said independent academic Cholthep Panboonchu. "I also think that the argument of the monks [who criticized the painting] was an attempt to bring in cultural and spiritual discourses to silence others."