BANGKOK, Thailand -- It's a ho-hum temple in the midst of Chinatown, one of the most popular draws for tourists visiting Thailand's bustling capital city, and many visitors walk straight past it. Yet the temple contains one of the city's most beautiful attractions – a maginficent golden Buddha worth about $14 million. 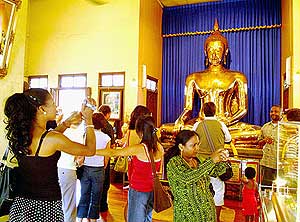 << The Phra Buddha Maha Suwan Patimakorn — known as the Golden Buddha — is currently in a tiny Bangkok temple, right, but will be moved into a purpose-built complex, later this year. GREG JORGENSEN PHOTO

The story goes like this: Sometime in the late 1700s, a large number of Buddha images were brought to Bangkok from the provinces of the newly united kingdom of Siam. One – a dirty plaster Buddha statue about three metres tall – ended up in a seldom-visited temple near the Chao Phraya River.

It was largely ignored until the temple was abandoned nearly 130 years later, and the statue moved to its current spot.

One day in 1955, as it was being moved, the statue slipped from its ropes and crashed to the ground, cracking the plaster.

Horrified workers noticed a brilliant yellow glow from inside and realized that it was gold — 5 1/2 tons of it.

Scholars have dated the image – now stripped of its plaster covering – to the 12th or 13th century, and believe that it was disguised to hide it from invading Burmese armies and eventually forgotten.

Long housed in a small, dusty chapel with room for maybe a dozen kneeling worshippers, the image is set to move later this year into a purpose-built temple that will tower over the old one. The project has been in the works for a while.

"Historic or religious sites in Thailand are registered as national treasures by the Fine Arts Department," said a project spokesperson. "Even small modifications are prohibited without a lengthy assessment process, which is why it's taken such a long time for the temple to get an upgrade."

The 600-million baht ($18.7 million Cdn.) brick-and-marble hall will be 60 metres tall with ornate flourishes particular to Thai architectural design. It will be topped with a seven-tiered metal chatra (a ceremonial umbrella-type structure which represents either enlightenment, royalty or nothing at all, depending on whom you ask). The statue of Buddha will be housed on the fourth and top floor, while the rest will be used for religious activities, a community museum and parking.

Many guidebooks, websites and Bangkok's infamous taxi and tuk-tuk drivers say that the statue is made of solid gold, and the Guinness Book of World Records certifies it as `The World's Largest Gold Buddha." But the truth is a bit less fantastic.

"Well, it's true the image is undeniably stunning," says the project spokesman, "but the only part of it that is truly 100 per cent gold is the flame-like halo on top of the Buddha's head.

However, the body was cast in an alloy with a very high gold percentage, as pure gold is too malleable even for jewellery – a large, heavy statue like this would be out of the question."

The glittering image is a remarkable sight, with its narrow eyes staring down on you. Its slender waist, long earlobes and slightly protruding belly button are all hallmarks of the Sukhothai style, widely considered to be the most graceful and refined example of Thai art and sculpture.

The statue sits in the "subduing the Mara" posture – cross-legged, left hand palm-up on lap, the fingers of the right hand lightly brushing the ground. This posture represents steadfastness, loyalty and enlightenment.

Fittingly, the temple built to house one of Thailand's most revered icons will open on the same day that the country celebrates their most revered leader – Dec. 5, 2008 will mark the 81st birthday of Thai King Bhumibol Adulyadej.

Celebrations will be large and memorable – just like the new temple.