BANGKOK, Thailand -- Buddhist temples in central Thailand have been flooded with abandoned cats and dogs after an outbreak of feline and canine distemper killed hundreds of pets in the past month, newspapers reported on Wednesday. 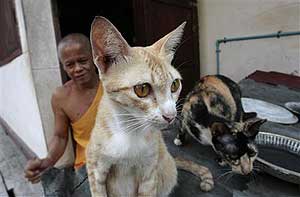 << Stray cats rest in a temple in Ayutthaya province, 80 km (50 miles) north of Bangkok, March 26, 2008. Buddhist temples in central Thailand have been flooded with abandoned cats and dogs after an outbreak of feline and canine distemper killed hundreds of pets in the past month, newspapers reported on Wednesday.

One temple in the rice growing province of Phichit, 350 km (220 miles) north of Bangkok, had to put up a sign asking pet owners to stop "supplying" the monastery with cats and dogs.

"Wat Bung has enough of cats and dogs," said a sign at the monastery posted on newspaper Web site www.manager.co.th.

"We prefer bricks, stones, sand, cement or paint," for construction in the temple, it said.

Each of the 50 monks' living quarters is shared by two to five cats, the Bangkok Post newspaper quoted a monk at the temple, where chicken owners abandoned their birds when the province was hit by a deadly bird flu outbreak, as saying.

The panic prompt cat-loving Prime Minister Samak Sundaravej and other state agencies to urge people to take their pets back from the temples and have them vaccinated.

"Don't worry. The vets say they are hit by cat measles or cat flu," Samak told reporters. "It didn't bother me when six of my cats died at one time."

Temples remain community centers in predominantly Buddhist Thailand and people make donation to monks or temples hoping the good deeds will bring them a better next life.

"Those who abandon their pets at the temples are giving themselves sin, not merit," a senior official at the National Buddhism Office was quoted in the Thai Rath daily as saying.