Lucky Charms In Thailand Are Out of Luck

Amulets Were Booming Till Prices Plummeted

NAKHON SI THAMMARAT, Thailand -- To the list of speculative market bubbles popping around the world, add this: Thai religious talismans. 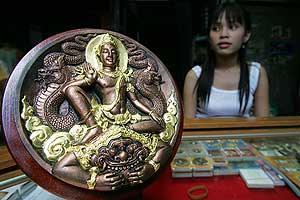 << For about two decades, Buddhist faithful also have been seeking help outside temples, buying up religious talismans, known as Jatukam-Ramathep, to ensure good luck or spiritual aid. Amulets like this one, on sale last spring in Bangkok, have seen their value plunge this year. Photo: James Hookway

Last year, prices for the small discs inscribed with an ancient mythological figure soared as ordinary Thais -- some hoping for good luck, others looking to make a fast baht -- forked over big-time. In this southern fishing town that is the center of the talisman industry, Saranya Nimitsomsakul supplemented her income from trading second-hand fridges, clothes and washing machines by buying up batches and selling them at a profit to her neighbors.

Late last year, the 36-year-old mother of two raised $13,000 to reserve a new lot. "For a time we did well," she says, sitting on a bench in her backyard as her husband, Mungkorn Nimitsomsakul, tends to their collection of song birds. "But then it all went wrong."

In a pattern now painfully familiar to investors the world over, the boom was so great -- some amulets sold for as much as $75,000 -- that the bust could only be close behind. A glut, combined with growing suspicions that many amulets hadn't been properly blessed by Buddhist monks, has blown the bottom out of the market in the past few weeks. Most of the little clay objects, part of a billion-dollar-plus industry just a few months ago, are now practically worthless.

The talisman dealer that Ms. Saranya deposited her money with has gone out of business. She, along with thousands of others across the country, is now deep in debt. She has filed a suit for damages against her dealer, as well as the abbot at a local Buddhist temple for allowing his name to be used on posters advertising the amulets. Elsewhere in this small fishing town, the wife of the police chief is suing a district mayor, claiming he delivered a load of faulty amulets; he claims she's just trying to duck out of a deal since the market's collapse.

Ms. Saranya's husband wants talisman experts to try to rescue the market by talking up the magical properties of the amulets to attract yet more buyers. "Governments bail out banks when they get in trouble," he says. "The talisman experts should do something to restore people's faith." The experts are reluctant. "Too many people got too greedy. They were producing and buying talismans purely to make a speculative profit," says Wiwat Nilnawee, a Bangkok-based amulet trader and national authority on talismans. "Better the market finds its true level."
[Thailand]

Special presses tied with sacred white string stamped out amulet after amulet from blocks of clay before being blessed by Buddhist monks. Last year, Thailand's air force flew a block of clay around the skies at supersonic speeds to give it additional power. The monks get a fee for the blessing ceremony, but the frenzy in the market allowed for the really big profits to go to the producers and dealers.

The popularity of the amulets, known as Jatukam Ramathep, goes back about two decades. Depending on who tells the story, they are named after either a 17th-century king or a Hindu god who reputedly defended the Buddhist monastery here from pirate attacks. Phantarak Rajadej, a previous police chief in Nakhon Si Thammarat, began making and selling a limited number of talismans in the 1980s to raise money for a Buddhist shrine. He is widely believed in the town to have mastered the art of black magic to ward off his enemies. After he died in 2006 at the age of 104, production in amulets surged. Word about the talismans' supernatural powers quickly spread to Bangkok, the capital. Amulet traders say prices ballooned because many Thais were worrying about the impact of a military coup in September 2006. Some wanted to buy spiritual help to see them through the turmoil and maybe make them rich.

Models carried names such as "Super Rich to the Heavens" and "Eternally Wealthy" and dealers paid millions of dollars in newspaper and television advertisements to fuel the frenzy. The research department of Thai bank Kasikornbank PCL estimated that the market for Jatukam Ramathep amulets swelled to $1.5 billion last year.

Nakhon Si Thammarat and its Buddhist clergy were among the biggest beneficiaries. Visitors arrived from Bangkok and as far away as Malaysia and Singapore. A room at the swankiest hotel in town, the Twin Lotus, required a reservation three months in advance. Airlines laid on extra flights to town, while prominent businesspeople chartered planes to fly monks and other VIPs to the Buddhist temple where the talismans were blessed, the 13th-century Wat Phra Mahatat.

Amulet dealers in Bangkok say the temple has earned over a million dollars, which it is now using to repair walls, crumbling spires and ancient bell towers.

Some clerics in Thailand say the talisman craze has distracted from true Buddhist teachings. Phra Thepvinyaporn, abbot of Wat Phra Mahatat, claims it is consistent with the faith. "People are just tools of God's will," he says. "Buying talismans was a way of providing the means to support our temple."

The abbot blessed the $13,000 of amulets that Ms. Saranya paid for but never received -- and he is now the chief target of her quest for compensation.

"We feel duped," she says, her losses far in excess of the $3,000 she and her husband earn in a good year. "We make our living in this community and we can't afford to lose our reputation." The couple borrowed money from relatives to pay back those they had taken money from, leaving themselves further in debt.

Compounding their problems, the slump in the local economy following the collapse of the amulet market means there are fewer goods for them to buy and sell. They have opened a small tea shop to help make ends meet, which earns them about $32 a week.

Ms. Saranya's husband, Mr. Mungkorn, says he believes the power of the talismans which they bought earlier can still help them. "The people who cheated us will be punished by the spirit of Jatukam Ramathep," he says. In her case against the abbot, Ms. Saranya claims that by lending his name to the batch of amulets, he helped dupe her into making a failed investment. She is seeking $13,000 in damages.

Her case is one of a half-dozen being handled by local lawyer Chor Chuepetch. He says too many entrepreneurs leapt into the business once they saw how profitable it was. They began churning out amulets from rented facilities at almost-industrial levels, saturating the market.

"Some talismans weren't properly blessed, while some dealers walked off with money which investors left with them as a deposit," Mr. Chor says. "Many of the people who have lost out are completely hopeless." The abbot, Phra Thepvinyaporn, 59 years old, is unperturbed. "I'm not surprised that somebody would try to sue me," he says. "Many people are broken-hearted and will do anything to recoup their losses." But he says it is only natural that markets go up and then down. "There is a cycle, just like fireworks," he says, polishing his thick glasses and adjusting his orange robe in the baking heat. "When you light the firework it rushes skywards, then booms and disappears. When it's gone, you wait for another firework to be lit."