For ethnic Karen forest dwellers, Songkran is a time to strengthen old traditions in order to cope with modern challenges 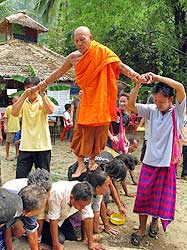 << Expressing deep faith, the villagers bow down for the monk to walk on their backs

Their faithfulness to their ancestral culture was evident during their recent Songkran traditional New Year last week.

While Songkran has been reduced to a water festival throughout much of Thailand, Songkran in Sanepong and other ethnic Karen villages remains a time when people unite to express gratefulness to nature, religion and their elders.

The Karen celebration calendar does not follow the national Songkran festival, which is fixed from April 13 to 15 every year.

"Songkran occurs on the full moon day of the 5th month in the lunar calendar. This year it fell on April 20," said Buddhist monk Phra Kosanano, 66, explaining why Sanepong celebrated the New Year a week after April 13.

"City people may want to fix the dates for convenience. But we prefer to keep the old ways," he added.

About a six-hour drive from Bangkok, Sanepong is a small village of some 100 families on the edge of Thungyai Naresuan Wildlife Sanctuary, a World Heritage site. Not far from the main road, its easy access is both a boon and bane for the community, which once was the cultural and political centre of ethnic Karen in the western forests.

Sanepong was the commanding centre and home of the Karen chieftain honoured and appointed by the Siamese kings to guard the western borders from the Burmese. It is also where Phra Kaew, their most sacred Buddha image, is kept under tight protection.

Nowadays, the forest dwellers at Sanepong and other villages in Thung Yai are considered illegal forest encroachers subjected to eviction. While the elders fight for their ancestral land rights, the young are caught between the old and new as the generation gap keeps widening.

Songkran, however, is the time to brush aside these worries. It is a time to remind the Karen and their young who they are.

The melodious sounds of xylophones fill the air as villagers in colourful traditional costumes head for the big Bodhi tree in the heart of the village. Each villager is armed with a bamboo pole to prop up the tree's branches. Amid the soothing sounds of monks chanting, the villagers sit on the ground, their cupped hands holding up flowers and handmade candles in deep reverence. 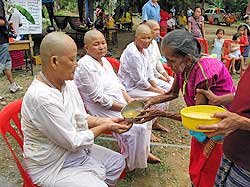 "Our livelihoods depend on Mother Nature and this is our way of expressing our gratefulness," explained Phra Kosanano.

In merriment, the villagers then head towards the shimmering Sanepong creek to release fish, which is followed by a bridge-washing-and-repairing ceremony. After placing small pieces of rocks, flowers and candles at the foot the wooden bridge in a symbolic gesture of community service, the villagers sit by the creek to listen to another round of prayers.

While these ceremonies are often interpreted as an expression of the forest dwellers' respect to nature and community spirit to protect public properties, they are also linked to an old Buddhist tale in which a man avoided his death, predicted by a fortune-teller, by making merit through propping up trees, releasing fish and repairing a bridge.

As the country struggles with drunk driving and increasing death tolls during Songkran, drinking and gambling are noticeably absent when the ethnic Karen welcome their New Year. It is also a norm for temples to offer free vegetarian meals to all celebrants.

Since Sanepong is home of Phra Kaew, the forest dwellers in Thung Yai and nearby areas come here in droves for the song nam phra, or bathing ceremony of the Buddha image. It is only during Songkran that the temple allows Phra Kaew, along with its intricately carved ivory tusk, to leave the bullet-proof altar and receive public respect.

The solemn ceremony of pouring scented water on the Buddha image is followed by a lively version of a bathing ceremony for monks. The gush of scented water is sent through water pipes made of bamboo, which soak the monks from head to toe.

After clothing the monks in saffron robes, they are carried by the hand to walk on the backs of the faithful, both men and women, back to the temple without letting their feet touch the ground.

White-robed nuns and elders are next to receive respect from the Songkran celebrators before the water splashing fun starts.

Nighttime is when the villagers, young and old, watch the ram tong dances and songs, which narrate the beauty of nature and the Karen culture.

While many young Karen wore their traditional costumes, others came in fashionable outfits, complete with brightly dyed, spiked hair and silver accessories.

He heaved a deep sigh. "We know we cannot afford not to send our children to schools. Yet, the more they study, the more they forget their roots, their culture, their parents. We don't know what to do."

Many Sanepong youngsters told their parents they could not come home for Songkran because they had to return to work after the official Songkran holidays ended.

"Isn't it sad that one's work has become more important than one's parents?" he remarked. "Worse, when they come home, they like to tell their parents what to do and what not to do!"

The world is changing, and changing fast. That is why keeping a traditional Songkran is important, he said. "The young may not know the history of their ceremonies and they may want to join the modern world. But by continuing to observe the traditional Songkran, they will be reminded of who they are.

"It's important to know that we're Karen and to preserve our culture," he stressed.