Ayutthaya, Thailand -- Ayutthaya, Thailand’s ancient capital, is a place steeped in history. Ask any local what the major attractions in Ayutthaya are and the answer would be the ancient ruins, the Buddha images and the stunning bell-shaped chedis (pagodas) rising skyward from the ground. 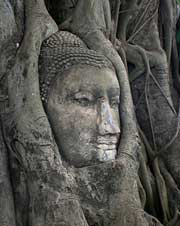 << The major attraction here is the stone head of Buddha encircled by the roots of a fig tree.

Located 76km north of Bangkok, Ayutthaya invites discovery and imbues in one a feeling of humility, for it has awe-inspiring structures that have withstood the test of time.

Its impressive heritage has become the bedrock of Thai society and shaped the Thai way of life.

The city was founded as Phra Nakhon Si Ayutthaya in 1350 by King U-Thong. It was the capital of Siam for 417 years, producing 33 kings. One of its greatest monarchs was King Naresuan, who defeated the Burmese in an epic battle astride an elephant in 1592.

At the height of its glory, Ayutthaya was one of Asia’s most prosperous cities with glorious temples, palaces and pavilions.

The day-tour to the city from Bangkok set me back RM160 but I had no regrets.

The moment our bus reached Wat Phra Si Sanphet, we were mesmerised by the three chedi which stood like giant bells.

“Wow!” all of us in the bus exclaimed at the same time. I was overcome by the towering magnificence before us.

Built to enshrine the ashes of three kings during the 15th century, the Ceylonese-style chedi have become a symbol of the city.

The monastery was reportedly one of the grandest temples in the ancient capital. Unfortunately, it was burnt down when the kingdom was invaded, but when you stand and gaze upon the ruins, you can imagine its golden age.

A short distance away lies Wat Phra Mahathat, an older temple build by King Borom Rachathirat I in the late 14th century. According to a legend, the king had a revelation, following which the relics of the Buddha suddenly appeared. The temple was built to house the relics.

A buried treasure chest containing a relic of Lord Buddha, several golden Buddha statues and many other objects in gold, ruby and crystal were found during the excavation in 1956.

What remains at the site today are several small chedi and Buddha images with broken limbs.

The major attraction here is a stone head of the Buddha which is entrapped in the roots of a fig tree, creating one of the most mysterious phenomena in Ayutthaya.

There is no clear evidence but it is assumed that when the Burmese defeated Ayutthaya, the temple was set on fire and many of its statues fell to the ground. The place was deserted for more than 100 years, causing trees to grow around the head.

Another theory is a thief tried to steal the Buddha but failed to carry it across the wall due to its weight and so left it at the spot.

Whatever the explanation, the tree-covered head immediately set us off on a camera-clicking frenzy.

We were given another sample of the city’s splendour at the Bang Pa-In Summer Palace. It was used as a country retreat by several kings after it was built in the 17th century until the capital was shifted from Ayutthaya to Bangkok.

Today, the palace is mostly used for state functions. Buggies can be rented at the entrance if you do not feel like exploring the vast grounds on foot. The palace is very European in design. The buildings are laid out along an artificial ornamental pond and lawn adorned by Greek-styled statues of angelic cherubs and nubile women.

Although the original building was said to be in the style of a Swiss Chalet, the modern building has a more “Paris Metro” art deco feel to it. It is not open to the public as the royal family still uses it.

Perhaps the most interesting building in the inner complex, and the only one open to the public, is the Chinese-styled residence presented to King Chulalongkorn (Rama V) by the Chinese Chamber of Commerce in 1889.

The eye-catching design features a Chinese-styled roof in red and gold.

For a bird’s eye view of the palace complex, Ho Withun Thasana (The Sages’ Lookout Tower) is an ideal spot. However, fatigue got the better of me and I chose to admire it from the ground.

After all that walking, I thought nothing could be more perfect than to cap the day with a leisurely cruise along the Chao Phraya River to Bangkok.

On board the 200-capacity vessel, we were treated to a generous buffet spread of Thai and Western dishes. The tom yam soup was so “yummy” (no pun intended), I had four small helpings.

After lunch, I climbed up the sundeck to enjoy the afternoon breeze and take in the boathouses and riverside temples. The pastoral scene changed to one filled with skyscrapers and wide concrete bridges as we approached Bangkok.

I felt like Huckleberry Finn sailing down the great Mississippi in a riverboat. This was truly the life! It was money well spent.