A growing number of parents, not all of them Buddhist, are realising the benefits of a mind-centred, Buddhist-approach to education

Bangkok, Thailand -- In a society where success is measured in material terms, most parents hope that the educational system will set their children on the path to a prosperous future. 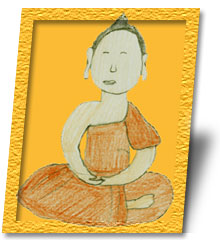 A school's academic reputation, the variety of languages it offers and the intensity of its English lessons are crucial factors that the present generation of Thai parents consider when choosing a school for their kids.

But that's about to change. Lately, a large number of people are taking the view that developing children's minds is more important than just providing them with academic knowledge. As a result, alternative schools, particularly rongrien withi pud, or Buddhist-approach schools, are among the hottest subjects with new parents.

Today, Buddhist-approach schools that follow an educational system which is somehow regarded as out-of-date are seeing their waiting lists grow. Flowers Bloom, a dhamma-related hymn by a Buddhist nun, Mae Chee Sansanee Sthirasuta, commonly sung in rongrien withi pud has become a popular song among kindergarten-age kids nationwide. While vowing to keep the five moral precepts, sitting meditation and phae metta - extending kindness to all lives in the world - are some of the routine rituals an increasing number of schoolchildren perform every morning.

"Social problems are clear evidence that academic knowledge doesn't help a person when dealing with problems," says Bupaswat Rachatatanun, founder and director of Thawsi, one of the pioneers of Buddhist-approach schools. "And having a level of high education doesn't guarantee for a happy life, either."

Bupaswat or Khru Onn points out that reports about university students committing suicide because they didn't get good grades and cases of doctors killing their wives have caused people to question the nation's education system.

"The purpose of Buddhist-approach education is to develop a person both academically and spiritually," says Bupaswat. "For us, developing the mind is as important as providing an academic education and we consider human life as the most significant learning process."

Bupaswat observes that the way today's parents raise their children has changed dramatically from that of the past. While earlier generations of parents gave their kids little opportunity to express themselves, modern-day parents see the benefit of giving their children more leeway.

"Nowadays parents may focus on allowing their kids to express their ideas and creativity," he says. "Many raise their children as their friends and are afraid to act like mums and dads. They give their offspring a lot of freedom - democracy as they'd like to call it.

"But I think that's dangerous because even in a real democracy you cannot exercise your rights in every situation. For example, as an employee you will never have the same rights as your employer. And it's important for children to understand that.

"The Buddhist-approach education aims to expose children to the real world where they have to respect other people's rights and be a good friend (kallayanamitta). They are always allowed to express their opinions, but it has to be done genially.

"In the Western world, being creative might mean thinking differently or thinking outside the box, but in Buddhism creativity must also be virtuous and done in a balanced way."

Following the Lord Buddha's philosophy, ethical conduct (sila), steadiness of mind (samadhi) and insight wisdom (panya) are the three main practices used in Buddhist-approach education in order to achieve the state of being intellectual. Students need to understand how to act and speak ethically. They also learn how to think thoroughly and be able to examine themselves and properly handle different situations.

"Some people think that they need to build an academic foundation for their children starting from kindergarten so that their kids can get into a top university and eventually find a well-paid job. That idea may or may not work," says Vitoon Sila-On, vice president of S&P Syndicate Plc.

"In my view, we usually study something simply because we see the possibility that we might have to use that knowledge later. But 80 percent of what most people study at school doesn't really get used in real life," says Vitoon. "Our mind, on the other hand, is something we use all the time. Yet mind-studying is not found on many schools' curricula."

Vitoon is a father of three children, all of whom go to a Buddhist-approach school. Educated in England, he admitted that he is not a Buddhist-orientated person nor a regular temple-goer. But he admires the educational methods of the Lord Buddha.

"Even Westerners are interested in Lord Buddha's teaching because they realise the importance of the mind," says Vitoon. "Buddhist-approach education teaches you how to understand and master your mind, which many people may overlook. Children need to understand themselves first and know how to handle their own emotions before they can understand others. These things should be inculcated when they are young while academic subjects can be studied later at any time."

The Buddhist approach to education is not a dull or sombre system instructed by monks or nuns, if that's what you're thinking.

"Many people believe that Buddhist-approach education is all about chanting, meditation and dern chong krom walking. Some might even think that our students are studying the Pali language while kids at other schools are learning English and computing. But that's simply a prejudiced impression," says Patchana.

She adds that the core principle of Buddhist-approach education is to understand both the external (life and sciences) and the internal (the human mind). And because, as the Thai saying goes, "No knowledge is as vital as knowing your own mind", the Buddhist training will make learners the most intelligent and up-to-date people.

Learning outside the classroom is one of the key characteristics of Buddhist-approach education. Instead of sitting in a classroom with textbooks, or in a laboratory with test tubes, students go to ricefields to actually grow rice. Some people may think such an approach is a distraction rather than genuine studying and that rice farming is old-fashioned in this digital age.

"Do we want to have rice to eat in the future? Can we eat the Internet instead? Of course not," says Assoc Prof Prapapat Niyom, founder and director of Roong Aroon, another prominent Buddhist-approach school.

"Rice is our most important source of food and we cannot live without it. Knowing how to grow rice will never be out of date as long as people eat rice.

"Rice growing is multi-disciplinary subject for students, helping them to integrate science, language, biology, geology, geography and social culture. It's not a selective activity just for fun but an important learning process that also creates a conscious mind."

Bupaswat of Thawsi school also notes that there may be some misconceptions about Buddhist-approach education."There's a number of people who think that it is all about playing and going on field trips. But the truth is that at Buddhist-approach schools we make sure that education doesn't happen only in the classroom but everywhere and all the time. So kids will have lots of real-life knowledge. Children are curious by nature and always want to learn."

"As a child, we learned about nature - the earth, water and plants - from textbooks," adds Thawsi school's Patchana. "We studied about natural resources like oil and thought it's a distant subject and would never run out. And now we are experiencing fuel shortage.

"At Buddhist-approach schools we teach students to look at everything as a whole and to realise that they are a part of nature, so even the smallest thing they do will effect the universe."

Just as with many famous mainstream schools, getting accepted by a Buddhist-approach school is not that easy. For parents expecting to join highly-reputed schools, they might have to seriously prepare their children for entrance exams or calculate their budget on how much they can "donate" to the schools. However, those who are interested in being a part of the Buddhist-approach school have to face other kinds of challenges.

"Each year there's a number of parents who are interested in our approach and wanted to have their kids study at our school but can accept only 75 students," says Prapapat of Roong Aroon.

"So instead of sitting for the interview, we organise a two-day workshop where parents and their kids can join in various activities including seminars, sports and cooking. That way we can observe how parents and children communicate and interact."

At Thawsi school, an hour-long, one-on-one meeting between parents and teachers helps the school to make sure that they are made for each other. There's no test or exam. To be approved by the school depends solely on the interview with parents and, in most cases, without looking at the children because the school believes that the parents are the most influential persons in the kids's life.

So what types of families - parents, to be exact - may not fit in with the system? Do they need to be Buddhist?

According to Bupaswat and Prapapat, you definitely don't have to be Buddhist to join the boat. In fact, Christian, Muslim and Sikh students are seen at both Thawsi and Roong Aroon schools. However, you have to demonstrate that you are "ready".

"We have a clear vision on how we approach education," says Bupaswat. "When we talk to the parents, we try to see what they expect from us and whether we can deliver it. If they need their children to be heavily spoon-fed with academic knowledge, our school may not fit the bill. At the same time, we also indicate that we value the five moral precepts and we'd like them to do so, too," Bupaswat explains.

Roong Aroon also shares the same principles. Yet it doesn't mean that you have to be an extreme Buddhist practitioner or dress in white vipassana-style outfit in order to blend in with the system. At both Roong Aroon and Thawsi schools, they see a diversity of parents.

"Some parents are business people while some are very fashionable but we all respect the same moral philosophy and live together without feeling odd. I think it's human nature to yearn for warm relationships and a sense of belonging. At Roong Aroon, we aren't just related by our social status but we all belong in the same family where generosity is a common practice," says Prapapat.

"The characteristic that parents of Buddhist-educated children need are to be alert, awake and happy, and most importantly to always be ready to learn and improve together with their children," Bupaswat of Thawsi school concludes.