Beckhams in hot water with monks

David and Victoria Beckham have upset Buddhist monks in ThailandBangkok, Thailand -- The monks are upset about a state-of-the-art mosquito exterminator installed at the couple's recently renovated new home on the Thai island of Koh Samui. 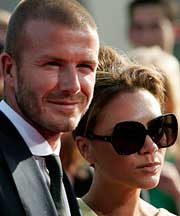 << MONKS UPSET: Buddhist monks in Thailand are upset about a state-of-the-art mosquito exterminator installed at David and Victoria Beckham's recently renovated new home on the Thai island of Koh Samui

The religious men - who believe all animals, no matter how small, are equal - have reportedly suggested the former Spice Girl and her soccer star husband find a non-harmful solution to the blood-sucking insects.

A source told Britain's Daily Star newspaper: "The Beckhams were very keen to keep the mosquitoes out because they can carry disease, as well as being annoying.

"But the last thing they want to do is annoy the locals, especially the monks who've been here hundreds of years, so they've got a real dilemma now."

The Beckhams bought their three-storey hillside home on the island in 2007 for 4.5 million Euros, but the full cost of the home after renovations is believed to be closer to 10 million Euros.

The house is also partly environmentally friendly, utilising solar panels to create some of its electricity. It also boasts 360-degree views of the popular holiday island.