Buddhist temple built out of one million beer bottles

Khun Han, Thailand -- A temple has been built by monks in northeast Thailand who used over a million recycled beer bottles to make the walls and roof. 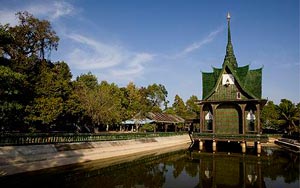 << Buddhist monks have recycled over one million used bottles to build their temple in Khun Han, Thailand near the Cambodian border Photo: BRONEK KAMINSKI/BARCROFT MEDIA

Wat Pa Maha Chedi Kaew, also known as Wat Lan Kuad or 'the Temple of a Million Bottles', is in Sisaket province near the Cambodian border, 400 miles from the capital Bangkok.

The Buddhist monks began collecting bottles in 1984 and they collected so many that they decided to use them as a building material.

They encouraged the local authorities to send them more and they have now created a complex of around 20 buildings using the beer bottles, comprising the main temple over a lake, crematorium, prayer rooms, a hall, water tower, tourist bathrooms and several small bungalows raised off the ground which serve as monks quarters.

The bottles do not lose their colour, provide good lighting and are easy to clean, the men say.

A concrete core is used to strengthen the building and the green bottles are Heineken and the brown ones are the Thai beer Chang.

The monks are so eco-friendly that the mosaics of Buddha are created with recycled beer bottle caps.

Altogether there are about 1.5 million recycled bottles in the temple, and the monks at the temple are intending to reuse even more.

Abbot San Kataboonyo said: "The more bottles we get, the more buildings we make."

The beer bottle temple is now on an approved list of eco-friendly sight-seeing tours in southeast Asia.
TOP