How old is Buddhism in Thailand?

Udon Thani, Thailand -- Anyone flying over the little Udon Thani district of Ban Phue can see the rice fields stretching endlessly in all directions, with occasional cattle gnawing on stalks left over from the harvest. Further north, along a canal snaking its way through the paddies, is Phu Phan, a sandstone ridge that reaches into Laos. 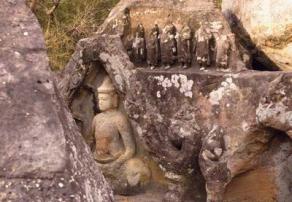 The lifeless Ban Phue landscape is hardly breathtaking, but Srisak Vallibhotama, the archaeologist leading our expedition, wants to convince us that, for people in his line of work, this area is as exciting as an amusement park is for kids.

“It’s so interesting!” he says. “The Fine Arts Department has excavated several sites around here and found many artefacts that suggest Phu Phan hill was a forest-temple hub for centuries.

“The boundary stones, Buddha images and other remnants date back to the late Dvaravati Period, around the 10th century.” Surely Buddhism hasn’t been around that long in Thailand, but we’re learning.

Our excursion is a lesson in “animism, Buddhism and forest temples on both sides of Mekong River”. Siam Michelin made the arrangements, the latest in a decades-long commitment by the French tyremaker to the Kingdom’s cultural heritage.

We first explore little Wat Nonsilaard in the village of Nong Kaleum. Here are some of the boundary stones Srisak mentioned.

They’re not your typical markers, but clearly ancient, three metres high and made of pinkish sandstone, with fine carvings on the lower parts of horses and people who are reminiscent of Angkor’s dancing apsara.

“The Nong Kaleum artisans might have used the same bas-relief technique of those who built Angkor Wat,” says Srisak, “but don’t let the carving style fool you.

“This isn’t a Hindu monastery, even if the artwork suggests that. This is a Buddhist temple—a forest temple, to be precise.”

Monks who pursue their faith in the woods usually come from a small faction of Theravada Buddhism popular among the Lao speaking communities of Northeast Thailand.

Orthodox and conservative, they bring scant possessions to the forests in search of nirvana through unfettered meditation.

“The Buddha’s wisdom was continuously passed on in the folklore, stories based on his earlier incarnations,” Srisak explains. “What we’re seeing on the carved boundary stones are illustrations of the Jataka tales about the Lord Buddha.”

We follow the monks’ trail between the trees to Phutthabat Buaban, an historical park five minutes by foot from the village.

Right in the midst of the forest we’re amazed to find another group of boundary stones.

This has been called ‘Thailand’s Stonehenge’.

The description is quite apt. Looming like a long-lost twin of the famous prehistoric site in England’s Wiltshire, there are three rings of tall stones. Each ring forms an octagon.

“One standing stone after the other two—forming the three-layer circle,” Srisak points out. “The composition is as unique as it is mysterious.”

So far, much less is known about the ruined monastery than scientists have pried from Stonehenge. The remains seem to hark back to the Dvaravati and Lop Buri eras, suggesting the forest temple also originated in the 10th century.

A 30-minute drive away is Phu Phrabat Historical Park, notable for its caves and bizarre rock formations with names like ‘Tower of Usa’ and ‘Turtle’. Here different civilisations overlapped, from the gloom of prehistory to Dvaravati times.

Strolling around the archaeological sites you can witness the fascinating transition from caveman to devout monk. In one cave is a prehistoric painting of a white elephant and her calf; walk a little further and there are Buddha images set against the walls.

“Such a serene setting—among the megaliths and rock chambers—made Phu Phrabat an ideal place for a forest temple,” Srisak says.

“The forest monks left their mark at every turn—the boundary stones, the Buddha images, the prayer grounds and so on.”

The trail crosses the Mekong to Phuphra Wangchang, a sandstone hill that’s only about two hours’ drive from Vientiane.

Again, the hill looks mundane, but it holds another important clue in the saga of the forest temples, another link in the chain that begins in Udon Thani.

Overlooking the river, carved in the rock wall, are two large depictions of the seated Buddha. Nearby is a flat area the size of tennis court. This was another forest temple, I can now tell.

“The two Buddha images are often overlooked, or at least mistaken for recently made images,” says Srisak, peering into their hands. “But the posture and style convinces us that they were probably made in the late Dvaravati Period.”

Three days into the journey and we’re still encountering surprises. So often we’ve been told that Buddhism arrived in what is now Thailand in the 13th century, when King Ramkhamhaeng invited Sri Lankan monks to visit.

Having seen the hundreds of boundary markers, strange megaliths and sculptures of the Buddha that are three centuries older than that, it’s time to correct our perspective.

Clearly the Buddha’s teachings arrived much earlier than those Sri Lankan preachers who braved the Bay of Bengal. The sutras were here a full millennium ago.