Buddha's teachings are more important than ever

Bangkok, Thailand -- Buddhists around the world celebrate Vesak Day, which reminds us of the message and teachings of the Lord Buddha to mankind, reflecting the noble truth about the cause of suffering and how to live with a peaceful mind - both of which are very much absent these days. 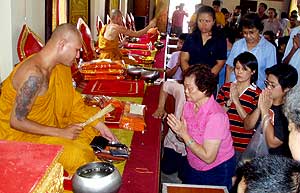 << Will Buddhists ever learn to be "sufficient consumers" as advocated by the Buddha's middle path?

Buddhist teachings focus on the mind of the practitioner and the ability to create peace and wisdom, more essential than ever, amidst the whirlwind of globalisation.

Rapid changes and tragic incidents that occur around the world show how the Lord Buddha's teachings are timeless. For instance, if people had pursued the concept of immunity and moderation, we would not be trapped in the current financial crisis, which stems largely from excessive consumption. If people were sufficiently aware of the inter-connection of their actions with the environment, we would have consumed more wisely without leaving such harmful effects on the world around us.

Buddhism's teachings do not aim to prevent the process of development, but rather urge people to progress in a sustainable manner. And today, the message of the Lord Buddha couldn't be more appropriate, as we face several crises at once.

At the recently concluded International Buddhist Conference on Vesak held in Bangkok this week, participants from more than 70 countries discussed how Buddhist teachings can provide an answer to our current political and economic problems.

Panellists at the meeting said the global economic crisis can be traced back to a decline in morality and the failure to observe moderation, while the ongoing political conflict can be resolved if people have more compassion for each other.

The Lord Buddha's teachings are practical and simple, but many people forget to exercise them or fail to be aware of the consequences of their actions.

The Buddha taught us to gain wisdom through knowledge, concentration and enthusiasm. We should not be self-indulgent, for the world is interconnected and our actions have an impact on others.

But many of us have forgotten the essence of these lessons, and this has led to a decline in morality. We value material possessions and suffer because we strive endlessly to satisfy our greed. And we easily adapt and distort the Lord Buddha's teaching to suit our daily lives. But to enable us to live peacefully and in happiness, it is time to reconsider how to apply these teachings.

Buddhist teaching matches well with the ideal Thai way of life. The "sufficiency" concept is in line with the Lord Buddha's teachings. He urged his followers to follow the middle path, but some of us now misunderstand the meaning of sufficiency or moderation, believing that it will slow down the progress of development and that it will make people become complacent.

But this is not the case. Development will be sustainable if we are prepared to cope with the consequences of what we have done and if we create sufficient immunity to cushion unexpected consequences that would otherwise prove beyond our control.

The US economic meltdown was a result of the failure to observe moderation. People consumed beyond their means until the system broke down. It was a lesson that Thais learned during the financial crisis in 1997.

At that time, many Thais began to be more appreciative of the moderation concept. They chose to consume wisely, while the authorities created immunity through a check and balance system that was enhanced to enforce more morality within the business system. What we have been done is still far from perfect but at least it showed we had gained some wisdom from the crisis, thus enhancing our future immunity.

Buddhist teachings also show us a way to solve the environmental crisis. If we humans consume wisely, we can limit the waste we discharge, helping to save the fragile world we live in. We should be aware of what we consume and be mindful of the consequences of our behaviour in this inter-connected world. Only through this can we protect our Earth. And only through compassion toward each other will we reduce the harm that has negative economic and social effects.

Buddhism will not mean anything if we fail to observe it. And as many speakers at the conference pointed out, the cyclical events in this world show that everything is not permanent. If we are equipped with sil, or "non-attachment", samati, or "concentration", and panya, or "wisdom", we will finally find a way to live with peaceful minds and hearts.