Wat Thamkrabok: The Temple Where You Go to Vomit

Bangkok, Thailand -- When I first heard about Wat Thamkrabok my life had reached a desperate state. An alcohol addition had almost destroyed me, and I wasn't sure how much longer I had to live. 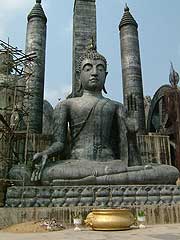 My liver was in a bad shape because of my alcoholism, and I had ignored a doctor's instructions, a few years previously, to see a consultant. I now feared that it was beyond repair. I had been an alcoholic for almost two decades and my life felt completely miserable and pointless; the sort of life I wouldn't wish a dog.

I found Wat Thamkrabok on the internet. In the past I had tried many treatment options, but none of them had worked for me; I always ended up back drinking. I had lived in Thailand for a few years by this stage so it came as a surprise to find that such a treatment facility existed right under my nose. The information on the internet provided something that had been missing in my life for years; it gave me hope. The regime at the temple sounded harsh, but the time for pussy-footing around had passed. I felt willing to do anything if it meant an escape from the misery that my life had become. Alcoholism was about to kill me anyway so what did I have to lose. I was only thrity-six and didn't want to die.

On my first day at the temple I met a wonderful monk called Phra Hans who answered all the questions that had bugged me for years about my addiction to alcohol. He explained that I had been using alcoholism as a tool to cope with life. Maybe this tool had worked for a short while, but it was now counter-productive.

This Swiss monk explained to me that my reason for choosing alcohol as a means to cope with the pain in life was that I had lost my path in life. If I once again found my way in life then the need for alcohol would fall away. He went on to explain that there was no way that this path would become clear to me while I was still abusing alcohol or any drug.

I spent ten days at Wat Thamkrabok and at times it was harder then even I had imagined. The temple is famous for its use of an anti-emetic to speed the detox process along. For the first five days at the temple we were expected to take this
medicine and spend the next ten minutes vomiting up pints of water into a gutter. This humbling ceremony took place in front of a large crowd of other patients and supporters. It is a difficult process, but also a magical one. Most impressively it did indeed speed the detox process along.

Wat Thamkrabok is a Buddhist temple but there is no attempt to convert anyone to any religion. Most of the monks are ex-addicts themselves so really know what they are talking about. The temple does not charge money for its work with alcoholics and addicts; which is pretty amazing when you compare it to the big money-making business that addiction treatment sometimes seems to have become in western countries. Not to take away from the good work that many of these treatment centres do.

On my first day at the temple the Swiss monk warned me that Wat Thamkrabok could not cure me. It would still be up to me to do the work.

What the temple did provide were great tools which would give me a chance at staying sober and living a happy life. I left the temple feeling completely cured of my addiction and so will always be grateful to it and believe it to be a magical place.

I appreciate though, that there are many options which work to to lead addicts and alcoholics into recovery. It would not be practical for everyone to turn up in Thailand in the hope of beating their addiction; many would go home disappointed.