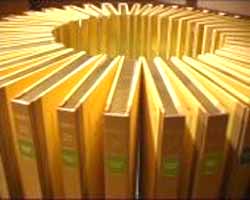 << The World Tipitaka Edition, 40-volume Romanised edition of the 25-century old teaching of the Buddhist Theravada tradition in the orthodox and original Pali language.

The scriptures are in Roman script, and were given, as a royal gift of wisdom and peace from Thailand, to The Buddhist Federation of Norway last year in connection with the funeral of Princess Galyani Vadhana.

The scriptures, which have been produced especially for The Buddhist Federation of Norway, will physically be handed over at a ceremony on the 17th of August in the Royal Thai Embassy in Oslo by representatives from the Dhamma Society - a charitable organisation in the Buddhist Theravada Tradition, founded in 1997.

According to the president of The Buddhist Federation of Norway, Egil Lothe, the scriptures have a practical and symbolic significance to those who practice Buddhism in Norway. He adds:
“The gift is a great encouragement and acknowledgement of our efforts in this organisation.”

Since 1999 the Dhamma Society Fund has undertaken the publication of the Tipitaka in Roman Script, the World Edition. In 2005, the printing project was finally completed and was published in 40 volumes as a homage to the Buddha and in honour of the Buddhist Sovereign Monarchy of Thailand. For an inaugural presentation, HRH Princess Galyani Vadhana, as Honorary President and Royal Patron, led a historic 24-hour Pilgrimage by a special flight from Bangkok to Colombo to present the special inaugural edition as a royal gift of Dhamma to the President of Sri Lanka on March 6, 2005.