Message of Dhamma to be spread via social networking 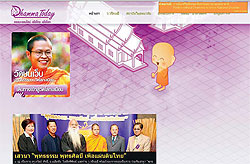 << The website http://www.dhammatoday-.com was recently introduced through the support of Software Park Thailand and IT companies.

The monk noted that the biggest influence in the world today is not power or money, but technology. "People today use technology for defiling purposes, why don't we adopt technology to serve the Dhamma. So we and the Dhamma volunteers set up the Dhammatoday as a channel for people to study the Dhamma," the monk said.

The director of the Vimutyalai Institute noted that Dhammatoday has more than 30,000 members on Facebook one month after its launch, and over 7,000 users of Twitter in two weeks.

With the limitation in space of Twitter, what is to be sent must be short but deep in meaning, it must represent the core of Dhamma, and this is the advantage of technology.

The monk noted that topics that members have raised over the website are mostly about working, the remaining are concerned with family and questions about Dhamma practice. Obviously there are no politic issues over Facebook and Twitter because this is the creative stage.

"Unless this technology is available, I can promote the Dhamma to just a certain level of scope," the director said.

From now on, anyone who would like to study Dhamma can be get closer to the Dhamma any time.

It is 95 percent completed, and the remaining 5 percent is welcome for feedback. "We would like to have everyone comment and jointly create Dhammatoday. It is the website for anyone, not only Thailand, but for the world," the monk said.

In the near future, all the content will be translated in English, and this will start on Makha Bucha day. There will be interactive features including live broadcasts of preaching by Phra Wor from anywhere in the world over the web.

This is a small step for a Thai monk, but an important step for Buddhist dissemination in Thailand to deliver to the world, he said.

"We would like to present Buddhism in a positive light so that anyone can learn the core of Buddhism," he said.

The goal of Dhammatoday is to have people study the Dhamma, and have Dhamma in their lifestyle. People need not wait to fall sick or suffer before studying the Dhamma - they can have Dhamma as a part of their daily life.

The monk noted that people around the world are interested in Dhamma because it has been proved the best and most practical approach. The world now is coming to the most critical turning point, and people are turning to Dhamma for solutions.

"We cannot reject technology, iPhones or computers, but we should use technology as a tool to extend our potential. Technology should play a role in fulfilling Buddhism's dissemination," he said.

Asked whether it's wrong for a monk to use IT, Venerable Wor replied that technology is just a medium, whether its is good or bad depends on the users. If one uses it with wisdom, technology will become a tool to enhance the potential of the monks in working with the Dhamma, but without wisdom, it will damage the monk himself.

The website also has virtual temple rooms including a reflectional room, a mindful room, and an inspirational room where visitors can learn the Dhamma through the 3D feature.

At present, the website is hosted at Kasetsart University, handled by Dhamma volunteers of the university.