Bangkok, Thailand -- The glittering reflection of the sun on the shining chapel of Pak Lam Kha-Khaeng Temple in Thailand’s Kanchanaburi province, 130 kilometres west of Bangkok, makes the edifice stands out among other religious structures in the serene compound. 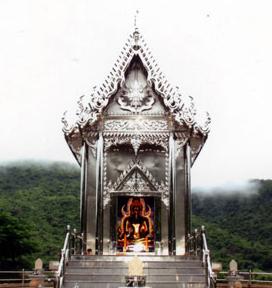 Like no other, this outstanding ubosot, or Buddhist chapel, is crafted from stainless steel and is uniquely built to impress religious worshippers and visitors alike.

The temple’s abbot said he wanted to make a difference by building this ubosot so it would one day become one of Thailand’s outstanding historic sites.

Also, it was because stainless steel is such a strong and durable material.

“Stainless steel is easy to look after. It’s a worthwhile material. No one in Buddhist history has made an ubosot like this before,” said the abbot of Pak Lam Kha-Khaeng temple.

It took seven years and Bt30 million to complete the Buddhist chapel, which was 4.5m wide, 12m tall, and 9.5 in length. Apart from the ubosot, a large Buddha image in stainless steel of 15m in height was also built within the same premises in order to honour His Majesty King Bhumibol Adulyadej.

The abbot said the distinctive chapel draws large numbers of visitors to catch a glimpse of it, especially on weekends and public holidays.

Buddhist faithful and other visitors can travel to Pak Lam Kha-Khaeng temple only by boats, which may be boarded at Ban Ta Gradaan and Ban Mae Huay Kamin in Sri Sawat district, where the journey up the river can lead the visitor to a picturesque view of Thung Yai Naresuan Wildlife Sanctuary.