Pattaya, Thailand -- Less than two hours’ drive from the teeming tourist beaches of Pattaya in Thailand, a largely undeveloped hillside in Chounbri province conceals a very different site – a sacred place home to a Buddhist temple. 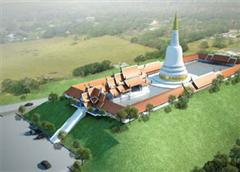 Founded some years ago, the temple has been operating in makeshift facilities. Now the local community has undertaken a project to build up the temple with the traditional structures of a Buddhist shrine, complete with a Chedi (also known as padoga) and the main hall Phra Ubosot.

A Chedi is a bell-shaped structure containing Buddhist relics. Original Chedis are thought to be places that shield the remains of Buddha. A Chedi is a symbol of enlightenment, and it is the oldest and most prevalent form of Buddhist architecture. A Phra Ubosot is the holiest prayer room of a Buddhist temple.

The temple committee, in charge of the new development, wants to see that the project will produce a sacred place that will fulfill the spiritual needs of a great many generations to come. Their very ambitious goal is to have the structure of the Chedi serve more than one thousand years. With a little help from Outokumpu.

Conventionally rebar is fabricated from carbon steel. Carbon steel rebar relies on the high alkalinity of concrete for its protection from corrosion. In long-life structures such as temples and monuments, the high alkalinity is unlikely to be retained, and the carbon steel will corrode. The corrosion products will cause the concrete to burst (known as spalling) resulting in the ultimate failure of the structure.

Stainless steel rebar is an insurance against corrosion and spalled concrete. To ensure long life spans, stainless rebar has been used successfully in highly demanding structures, including bridges and other road infrastructure, which show no signs of deterioration after decades of service.

Also on the recommendation of their stainless specialist, the temple engineering team contacted Outokumpu for quotes and information on both stainless designations.

At this stage, Outokumpu’s specialists stepped into the process. Outokumpu wanted to make sure that the project would have access to all relevant information about stainless steel designations and that the project could, as a result, choose the best one for the application.

After a review of the project and its technical details, Outokumpu came to the conclusion that the best fit for the customer’s requirements in terms of product quality and cost optimization would be Outokumpu’s lean duplex LDX 2101®, rather than the two stainless steel designations first proposed for the project.

In April 2010, groundwork commenced at the temple site with Outokumpu’s LDX 2101® rebar. The construction is estimated for completion in 2-3 years.

Suwimon Kaewkanokwichit of Outokumpu’s representative office in Thailand elaborates on some of the benefits for the customer from collaborating with Outokumpu: “In addition to securing an optimal product, the project has received excellent support from Outokumpu.”

The Outokumpu business units involved in the project from the very beginning have been Rod Mill and Bar Finishing in Sheffield, UK. “The teams at these units have worked hard to be flexible in deliveries to meet the needs of the project,” Suwimon affirms.

Outokumpu’s Singapore-based specialist in stainless rebar and other products for the construction industry, Nick Tan, adds that Outokumpu’s services have played a major role in the success of the project.

“We have worked very fast as a team,” Nick says. “We have continuously engaged with the customer in order to fully understand their needs, and we have done our best to meet those needs, including air-cargo of samples for material testing, cut-to-length service and close follow-up.”