Bangkok, Thailand -- The World's oldest Buddhist Scriptures are exhibited for the first time in Thailand at the Phutthamonthon Buddhist Park in Nakhon Pathom province from 8 November 2010 to 5 February 2011. 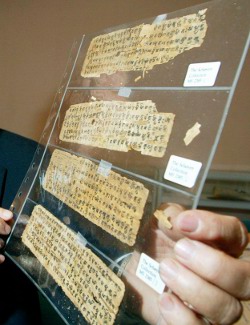 Norway played an important role in recently moving the scriptures to safety from Taleban attacks ten years ago. The pubic display in Thailand takes place in honour of the seventh cycle birthday of His Majesty the King on the 5th of December next year.

The scriptures are the world's most ancient Tripitaka scriptures more than 2,000 years old. Some parts of the ancient scriptures have disintegrated. More than 10,000 pieces will be on display at the exhibition.

Buddha's teachings were first recorded on palm leaves during the first century BC. The scriptures were written with "Prommi" characters that were used during Buddha's time and serve as evidence that the scriptures are the world's oldest.

Norway and Britain then secretly moved the scriptures out of Pakistan from 1997 to 2000. They brought out 5,000 complete scriptures and 8,000 pieces of broken scriptures inscribed on palm leaves, bark, leather and brass plates. 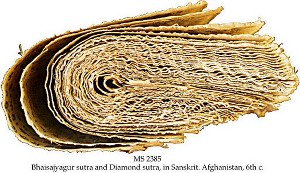 More than 10,000 pieces of broken scriptures displays at at the Phutthamonthon Buddhist Park in Nakhon Pathom province  >>

Phra Thammasitthinayok, Deputy Prime Minister Sanan Kachornprasart and more than 30 Buddhist monks and Thai representatives had brought the scriptures from Norway back for display in Thailand for the first time. Although the deputy abbot spent more than a year seeking the scriptures for an exhibition in Thailand, he finally succeeded as a result of a government-to-government deal.