Bangkok, Thailand -- A crowd of sad mourners has flooded the Buddhist temple of Pabaantad, in northern Thailand, to pay their respect to Phra Dharmawisuthimongkol, a monk who passed away on 31 January at the age of 97 from intestinal obstruction and pulmonary infection. 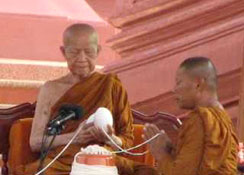 << Large crowds have gathered at Pabaantad Temple where the famous monk died on 31 January at the age of 97. The cremation ceremony is scheduled for 5 March in the presence of Queen Sirikit. The monk is famous for his preaching, involvement in social issues and fund raising. In ten days, the faithful have already donated more than US$ 1 million.

He was an expert in meditation and a leading figure on social issues, so much so, that he was able to raise millions during Thailand’s 1997 economic meltdown.

His body is set for cremation on 5 March at Pabaantad Temple, in the presence of Queen Sirikit, who will preside over the event.

Phra Dharmawisuthimongkol, better known as ‘Luang Ta Maha Bua Yan-na Sumpanno’, was born into a rich family of farmers, in the northeastern province of Udon Thani. After he was ordained monk on 12 May 1934 at the age of 20, he thought he would spend a short period living with other monks to meet his family’s expectations.

Instead, in Sakhon Nakorn province, he met someone who changed his life, Phra Arjarn Mun Puritatto, a monk who introduced him to the teachings of the Buddha and showed him the path towards peace of mind. When the master died, after sharing eight years with his young pupil, Luang Ta Maha Bua Yan-na Sumpanno went back to Pabaantad Temple, Muang district (Udorn Thani province), where he spent the rest of his life.

In addition to his fame as practitioner of meditation, Luang Ta Maha Bua was known for his involvement in social issues. When the country was struck by a major economic crisis in 1997, he urged fellow Thais to donate money, gold and other precious items to the bank of Thailand to help the recovery.

Thanks to his appeal, more than US$ 10 million and 12 tonnes of gold were raised, and placed in the bank’s reserves. The initiative was inspired by values such love for country, sacrifice and the unity of all Thai citizens.

In his will, written on 7 May 2010, he said, “It is my intention to give all the money donated to me by the faithful to the Bank of Thailand as a reserve fund.” In it, the monk also emphasised the importance of harmony to his followers.

If anything, his importance can be measured by his followers’ loyalty. In just ten days after his death, some 35,000,000 bahts (US$ 1.2 million) were raised in cash, and that is on top of cheques, gold and US dollars. The money will eventually go to buy gold, be deposited in the National Bank.

Sarn Krungsri, 55, a local radio announcer, is among the many people who remember him. He said that after hearing so many of his teachings on dharma, he decided to tape them for radio broadcast so that the faithful could hear them. “This is how ‘Voice of Dharma for the People’ by Luang Ta Maha Bua was born.”