Udon Thani, Thailand -- Up to one million faithful are expected to pay their last respects to Luangta Maha Bua Yannasampanno (Ajahn Maha Boowa) at his cremation ceremony today. 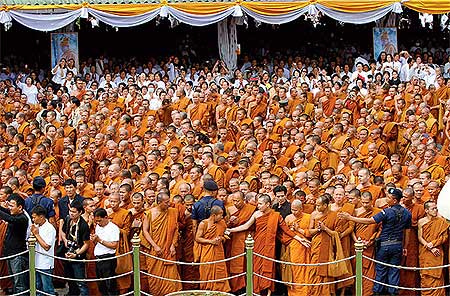 Her Majesty the Queen will preside over the cremation of the revered monk at Wat Pa Ban Tad forest temple in Udon Thani's Muang district.

Arrangements for the revered monk's funeral have been underway since his death on Jan 30 at the age of 97.

A temporary crematorium has been set up in front of the temple for the royally sponsored cremation ceremony.

Wood from chik trees, rather than traditional dokmai chan sandalwood, will be used in the cremation.

Phra Khru Atthakijnanthakhun, abbot of Wat Doi Lap Nga in Kamphaeng Phet, said the chik tree is widely used in the cremation of highly respected individuals in the Northeast.

"It's especially good when we intend to keep the remains after the cremation. It is a kind of fuel which turns the colour of the remains light, not dark like other kinds of wood.

"And if the remains of the monk are to become relics, they will opt for this type of wood," said the monk.

However, he said Luangta Maha Bua did not ask for the use of chik wood or anything particular in his final arrangements.

"Luangta Maha Bua made funeral arrangements for other monks and he used chik wood, so we decided to give him the same," said Phra Khru Atthakijnanthakhun, a member of the committee organising the funeral rites.

"He didn't ask for anything special."

The cremation will be broadcast on Channel 11, Radio Thailand and community radio stations.

With up to one million people expected to attend the cremation service today, provincial authorities and followers of the monk have been busy with preparations. 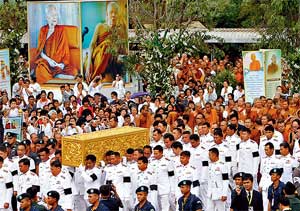 << A large crowd converges at Wat Pa Ban Tad in Udon Thani to take part in a procession yesterday to move the body of Luangta Maha Bua Yannasampanno to the crematorium. The royally sponsored funeral of the revered abbot will be held today.

Hotels in Udon Thani and nearby provinces are fully booked.

Kitchens and relief centres have been set up to provide food, water, toilets, and first aid for those taking part.

The Public Health Ministry said nine medical centres and more than 100 mobile medical units will be in use today.

About 500 nurses will be deployed, and 20 ambulances and three helicopters will be on standby.

A field hospital has also been set up at Ban Tad school, about 1.5 kilometres from the temple.

The 10-bed hospital has specialists in attendance.

Land covering 1,666 rai around the temple has been prepared as parking space with capacity for 600,000 cars.

About 600 shuttle buses and mini-vans will provide services between the temple and the car parks.

All vehicles except the shuttle buses will be barred from two main routes leading to the temple from noon onwards. About 1,500 police will be deployed to direct traffic. 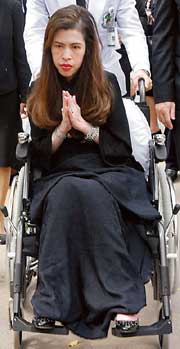 Makeshift shelters are popping up around the temple to take overflow from the hotels.

Police and about 2,000 troops from the 2nd Army Region will be deployed to step up security.

Tens of thousands thronged the temple yesterday to pay their last respects and observe a procession to move the monk's coffin from a pavilion to the temporary crematorium.

The procession, attended by a group of border patrol officers, proceeded as 50,000 visitors watched. Some wept. A large number of newcomers, unaware that the monk's body was being moved to the crematorium, waited in four queues stretching over one kilometre from the pavilion.

Commemorative pictures, lockets and tens of thousands of books on the monk's life and teachings have been distributed to visitors.

Luangta Boonmee Paripunno, abbot of Wat Ban Na Khoon, chaired the ceremony which was carried out in accordance with the monk's will.

The monk had made three wills with the same message _ that all gold ornaments and bars and other donated assets in his custody be handed over to the Bank of Thailand to become part of the national reserves.

Since he passed away on Jan 30, cash of 292 million baht and 73 kilogrammes of gold have been donated. More is expected to come.

The handover of cash, gold and other donations to the central bank is expected to take place on April 12.

Luangta Maha Bua initiated the fund-raising scheme to help the country recover from the effects of the 1997 financial crisis after he learnt that the hospital he was visiting had huge debts.

Their Majesties the King and Queen met him in 1998 and donated to his funds.

Follower Patcharin Chantaduang, from Sakon Nakhon, said she was overwhelmed at being able to join the rites.

"It is my last chance to pay my respects. I will stay at the temple and prepare for the send-off," she said.