Gender and religion: Where nuns fear to tread

Bangkok, Thailand -- The controversy over a Thai Buddhist nun successfully petitioning an Indian court to gain control of a temple has raised broader questions surrounding the administration of temples overseas. It has also highlighted the ambiguous role nuns, or mae chi, face within the structure of Buddhism in Thailand. 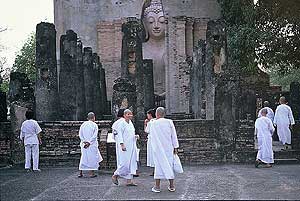 A court in India's Bihar state recently ruled in favour of Mae Chi Ahree Pongsai, a nun in her seventies, who lodged a complaint requesting that she be allowed to replace Phra Khru Pariyat Thammawithet as head of the Thai Nalanda temple, 90km from the state capital of Patna. Mai Chi Ahree reportedly claimed that the former abbot, Phra Maha Tharntong, who died in 2007, had written in his will that if she came into conflict with his successor, she should seek assistance from India's courts to take over.

Phra Khru Suwatthanachariyakhun, vice-rector for public relations at Mahachulalongkornrajavidyalaya University (MCU), said that as the temple was in India, the court's ruling would have to stand, but the decision flew in the face of Thai-Buddhist tradition.

Essential Buddhism scripts and principles clearly outline the power structure within a temple and the separation of roles between mai chi and monks, he said. ''Mae chi are barred from managing temples. Only monks, rising to the position of abbot, can manage them,'' he said. ''During the Buddha's era, there weren't any nuns. Now things have changed, and now they can stay on temple compounds.

''But we have never had a nun run a temple before. What will society think about this?''

Phra Khru Suwatthanachariyakhun said that when monks go to foreign countries, they might request that nuns from their temple in Thailand accompany them, but their role is facilitative _ assisting in religious studies and helping to manage food and accommodation for visitors.

The administration of the temple is the sole domain of monks, he said.

NUNS IN THAILAND: BETWEEN TWO REALMS

Mae chi occupy an ambiguous place in Thai society. The official council of ordained clergy in Thailand, the Sangha Supreme Council, does not recognise mae chi as full members. They are not officially allowed to interpret or teach the dhamma (the teachings of the Buddha), or perform religious rituals.

The Interior Ministry, however, does regard them as clergy, meaning they are unable to vote, while the Transport Ministry treats them as lay people, denying them rights accorded to monks, such as free transport services.

In the past, efforts have been made to clarify the status of mae chi, such as in 1991, when the Institute for Thai Nuns pushed parliament to consider a ''Nun Act'', which would outline basic regulations for nuns.

According to a September, 2002, article from Inter Press Service, the Religious Affairs Department's response was unambiguous: ''It is impossible. A nun has never existed in a Thai Buddhist decree.''

Sri Lanka, like Thailand, follows Theravada Buddhism, however it permits women to be ordained as monks. A controversy also challenging traditional power structures within Thai Buddhism erupted in 2001 when a Thai female Buddhist scholar, Dr Chatsumarn Kabilsingh, was ordained in Sri Lanka, and shortly thereafter, another Thai woman, Samaneri Dhammarakhita was ordained by a Sri Lankan preceptor on Thai soil, marking the first time a woman had been ordained in the country.

''What was she thinking when she went to court to get the rights to manage the temple?'' she said. ''Mae chi are under the support and teaching of the monks. We have no right to challenge their authority in any case,'' said Mae Chi Ananta. ''In the temple, the teaching of the monks receives the highest respect from the people. The mae chi do not earn the same respect. How can they then manage temples successfully?''

She said mae chi can establish meditation centres and foundations and administrate them, ''but definitely not temples''.

Further complicating matters in Mae Chi Ahree's case is the way in which Thai temples abroad are administered. Temples here are established as juristic entities under the Ecclesiastical Law (1962, and 1992). The temple is considered religious property that cannot be transferred to any person and comes under the authority of the Sangha Supreme Council. Overseas temples, such as the Thai Nalanda temple, are not beholden to the Ecclesiastical Law or the Sangha Supreme Council.

There are currently over 300 Thai Buddhist temples around the world, with some 1,200 monks. Thai communities abroad establish the temple, putting administrative power in the hands of laypeople.

''Most overseas temples are established as non-profit organisations or under a foundation with or without Thai Buddhist monks at the beginning,'' said Amnaj Buasiri, director of the secretariat of the Sangha Supreme Council.

That difference has led to conflicts arising between monks and foundations' administrative teams, he said.

In some instances, committees overseeing temple affairs have fired monks, who have then complained to Thailand's Office of National Buddhism.

''The office has suggested that Thai monks should be named to chair foundations overseeing temple affairs, so that they can better deal with conflicts when they occur,'' said Mr Amnaj.

Phra Khru Suwatthanachariyakhun said that Thai monks going abroad must be familiar with the laws and regulations in their destination countries to avoid conflict. He said a better balance needs to be struck in the way overseas temples are administered _ a shift from the current situation that sees the foundation in charge, and the monks mere residents on temple grounds.

''It is very important for the abbot, the monks and the foundation committee to have set rules and an agreement on how to manage the temple and the duties of different parties.''

Phra Khru Suwatthanachariyakhun proposed that religious attaches be dispatched abroad to deal with conflicts such as those in Mai Chi Ahree's case, which he said will only increase as overseas Thai communities expand.

These attaches would cooperate with temples in providing Buddhist teachings and also help resolve disputes between monks and temple committees or wider disagreements between the temples and surrounding communities.

Mr Amnaj strongly believed that a concrete way to solve the management problem of Thai Buddhist temples in foreign countries is to transfer the temples to the Thai government. He cited Wat Buddhapadipa in London and Wat Sanghapadipa in Wales as examples of where this model has been effective.

''The temples transferred the land and property rights of the temple compound to the Thai government, and the Thai embassy in the UK works with them to help look after the property as a national asset interest in a foreign country,'' he said.

This would prevent disputes over the transfer of management rights, such as what happened at the Nalanda Temple and give Thai embassies the authority to step in should problems arise.

He said the proposal has been discussed among relevant authorities but without any resolution. ''Many factors, including different countries' laws and regulations, must be studied in detail,'' he said.

Mr Amnaj said the main point is that Buddhist temples are religious property and are meant to be a source of Buddhist teachings. They do not belong to any individual or group, even those who have established and supported them.

In the case of Mae Chi Ahree, Mr Amnaj, who returned from India said this week, said there had been no progress made in talks with her.

She refused to meet with government representatives, he said, choosing instead to speak through a loudspeaker and insisting she still had the right to manage the temple.