Siem Reap, Cambodia -- It's still entwined in mystery and jungle vines, but one of Cambodia's grandest monuments is slowly awakening after eight centuries of isolated slumber, having attracted a crack archaeological team and a trickle of tourists. 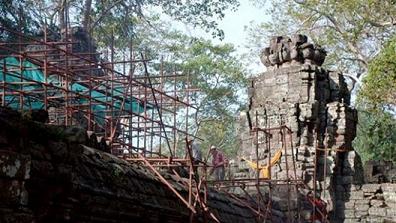 << Restoration work continues around one of 34 towers at the Buddhist monastery of Banteay Chhmar in northwestern Cambodia.

"It takes awhile to unfold this temple — and everywhere there are enticements," says John Sanday, the team leader, as he navigates through tangled undergrowth, past dramatic towers and bas-reliefs and into dark chambers of the haunting monastic complex of Banteay Chhmar.

What drove Jayavarman VII, regarded as the greatest king of the Angkorian Empire, to erect this vast Buddhist temple about 105 miles from his capital in Angkor and in one of the most desolate and driest places in Cambodia remains one of its many unsolved riddles.

At its height in the 12th century, the empire extended over much of Southeast Asia, its rulers engaging in a building frenzy which produced some of the world's greatest religious monuments. Called the "second Angkor Wat," Banteay Chhmar approaches it in size, is more frozen in time than the manicured and made-over superstar, and has so far been spared the blights of mass tourism of recent years at Angkor.

In 2011, an average of 7,000 tourists a day visited Angkor, one of Asia's top tourist draws located near the booming northwestern city of Siem Reap. Banteay Chhmar saw an average of two a day, with no tour buses and bullhorn-wielding guides to disturb the temple's tranquility or traditional life in the surrounding village.

Abandoned for centuries, then cut off from the world by the murderous Khmer Rouge and a civil war, Banteay Chhmar didn't welcome visitors until 2007, when the last mines were cleared and the looting that plagued the defenseless temple in the 1990s was largely halted. A year later, the California-based Global Heritage Fund began work at the site under the overall control of the country's Ministry of Culture and now spends about $200,000 a year on the project.

Sanday, a veteran British conservation architect, assembled a team of 60 experts and workers, some of whom were with him on an earlier restoration of the Preah Khan temple at Angkor. Others were recruited from the surrounding community and although barely literate, Sanday says they're among the best he's worked with in Asia.

Challenging them are hundreds of thousands of stone blocks from collapsed shrines and galleries scattered helter-skelter within the 4.6-square-mile archaeological site. Towers teeter, massive tree roots burrow into walls, vegetation chokes a wide moat girding the temple. Three-quarters of the bas reliefs — rarely found at other Angkorian temples — have fallen or been looted, the most notable being eight panels depicting Avalokiteshvara, an enlightened being embodying Buddhist compassion.

Thieves sheared off four panels with jackhammers, smuggling them into nearby Thailand where two are widely believed to be decorating the garden of a Thai politician. A pair has been recovered and the others are still at the temple, although only two still stand.

"We've been struggling away with this gallery for nearly two years now," says Sanday at another bas-relief, one depicting a figure believed to be Jayavarman VII leading his troops into battle. In vivid detail, the ancient sandstone wall springs to life with charging war elephants, soldiers plunging spears into their enemies and crocodiles gobbling up the dead.

Nature and time have proved the culprits: the vaulting protecting the 98-foot relief collapsed, exposing the wall to monsoon torrents, which seeped downwards to wash away the masonry and loosen the foundations. Pressure from the weight above toppled sections of the wall or forced it to lean.

"He's going to have to come down," says the 68-year-old architect of the king's image. A section of the wall is angled dangerously outward, he explains, so it must be dismantled, the foundations reinforced and the sandstone blocks meticulously numbered, charted, then set back into place.

Nearby, two young Cambodian computer whizzes are pioneering a shortcut to the reassembly process through three-dimensional imaging. The work-in-progress is one of the temple's 34 towers recently damaged in a severe storm. Some 700 stone blocks from the tower have been removed or collected from where they fell and each one will be videographed from every angle. Since like a human fingerprint, no stone is exactly alike, still-to-be-finalized software should be able to fit all the blocks into their original alignment after they are repaired.

"We hope that with one push of the button all the stones will jump into place to solve what we are calling 'John's puzzle,'" says Sanday.

When an original block has gone missing or is beyond repair, either an original stone from elsewhere on the site is used or, as a last resort, a new stone will be inserted. "My philosophy is to preserve and present the monuments as I found them for future generations without falsifying their history. So often people tend to guess what was there," he says.

The Global Heritage Fund, he says, is also intent on involving the community. "We can't protect Banteay Chhmar. They have to be the protectors. So they must gain some revenue from the temple," Sanday says.

The Community Based Tourism group, which the fund supports, is training locals to become guides and devising ways to derive more income from tourism, part of which is funneled into betterment of the entire village.

Sanday and local organizers, however, hope Banteay Chhmar's remote location will spare it from a mass tourist influx. Thus he is not keen to have it listed as a UNESCO World Heritage Site, something the Cambodian government is pushing for.

"I often come here in the late afternoons, when the birds come alive and a breeze stirs," Sanday says as fading sun rays, filtered through the green canopy, dapple the gray, weathered stones.

"It's peaceful and quiet here, like it used to be at Angkor. This is a real site."