Siem Reap, Cambodia -- At first glance, the life of a Cambodian Buddhist monk does not differ much from the life of an ordinary person. They sleep, eat, shower, talk, and laugh just like anyone else. 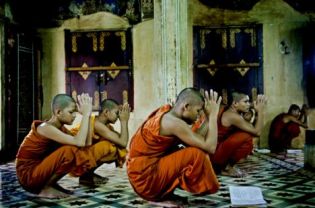 But the orange robes signify that these people are dedicating their lives to meditation.

About 130 mostly young monks live in Wat Bo, a pagoda in the heart of Cambodia’s temple city, Siem Reap.

The monastery requires them to shave their heads at age 3, but the lifestyle is attractive for children from poor families because of the opportunity to eat adequately and have the chance to study.

Among the monks is Piseth, a novice who since childhood has dreamed of being able to help his family.

“I became a monk because I was poor,” he said. “I know that someday I will return to a normal life. I dream about teaching Buddhism and English to children who, like me, have been led to become monks because of poverty.”

Piseth’s day begins at four in the morning to the rhythm of a drum announcing the start of a new day. After a quick shower, he and the others walk barefoot through the streets of Siem Reap in search of food offerings to help alleviate their hunger.

In silence, the Cambodian monks walk up to two hours per day carrying a silver bowl, where the predominantly Buddhist population deposit their offerings.

The adversity of this daily journey is evident in the monks’ cracked feet, which are washed with joy on return to the monastery before breakfast.

The cornerstones of Cambodian Buddhism are bonzes (monks) and wats (spiritual centers).

In the late 1950s, some 100,000 of a total population of 5 million were monks. This very high rate was largely due to the ease with which children could enter and leave the sangha (Buddhist community).

Becoming a monk and leaving the sangha are matters of individual choice, although in theory all Cambodian males over 16 should serve as monks for a period.

The majority of young people do not intend to become ordained lifetime monks ( bhikkhu ) and normally participate in the sangha for less than a year. Even if it is temporary, for the families it is a source of pride to have a child monk.

There are two classes of bonzes at a wat — the novices ( samani or nen ) and the bhikkhu.

It is in the wats that the daily life of a monk is developed.

In Wat Bo, the mornings and afternoons are dedicated almost entirely to studying. Subjects such as math, English and the teachings of Buddha make up the curriculum in monk schools.

Out of all their subjects, English is preferred by most, Piseth confesses, although they do not have many opportunities to practice it.

“I speak a little bit of English but can rarely practice it,” said Heng Bunchea, 38, another monk of Wat Bo.

“Many tourists come to take pictures when we pray or when we rest at the pagoda, but very few sit down to talk to us and if we don’t talk to them, we will not be able to improve our English.”

The continuous daily study is disrupted only by the hour dedicated to eating the last meal of the day.

This is one of the five precepts of the Buddhist monastic asceticism, which also includes not participating in any form of entertainment like singing, dancing or watching TV, using personal ornaments, sleeping in a luxurious bed or carrying money.

As the hours pass under the scorching Cambodian sun, shadows of the trees that cover Wat Bo serve as makeshift schools where several groups of novices speak about the Buddhist teachings they have learned during the morning class.

Suddenly, the sound of the drum breaks the tranquility and it is time to pray in the temple.

Little by little, all the monks who live in Wat Bo arrive at one of the temples located on the eastern side of the monastery. One by one they stand in position with their feet facing the direction opposite the large Golden Buddha statue that dominates the interior of the temple.

Between flashes of the cameras of tourists, the youthful voices create an almost magical atmosphere.

“Our sutras are dedicated to Buddha, to the Dharma and to the sangha,” Heng Bunchea explained.

On one side of the temple, several women in white robes with shaved heads are following the chants with deep devotion. Although making contact with the monks is forbidden for women, their role in the monastery is fundamental.

Adult women, especially widows, live in the wat and play an important role in the daily life of the temple.

They generally observe the same rules as the monks and prepare the altars among other tasks in order to guarantee the perfect functioning of everyday life in the small wat.

The night soon begins to fall over Siem Reap. The sky seems to honor the diligent human monks with their shaved heads and their robes in the colors of the sunset.

“I do not understand why countries go to war, why people kill other people, or why they go crazy for money,” Heng said. “But I do know that this happens in the world we live in, so I dream one day to see the world enjoying santepheap [peace].”