Surrounded by casino developments, the iconic Buddhist Institute in Phnom Penh faces the prospect of relocation or even closure as the modern world starts to close in 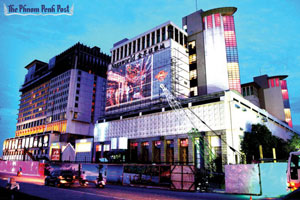 << This "Naga World" casino is among three that threatens the existence of the Buddhist Institute of Phnom Penh, Cambodia.

The library chambers inside the octagonal building are also open but empty; the students who used to come in their dozens every day have vanished. A handful of staff and friends of the institute sit around the grounds, beneath the Khmer-style three-tiered roof, discussing politics or their picks for the World Cup. Sometimes they have to pause until the clatter of drilling subsides.

With the Buddhist Institute surrounded on three sides by casino construction, visitors are almost non-existent. Across the street loom the cranes of the TSCLK Integrated Complex, still in its early stages but part of the future 1,000-hotel-room Naga 2 casino annex. There are concerns that the developments will swamp the institute and force it to relocate or close.

To the left, digging machinery removes mounds of earth for a subterranean walkway that will connect the new complex to NagaWorld, the existing 24-storey casino and entertainment complex that rises behind the institute. To the right on institute land is the beginning of steel framework for an electricity sub-station, designed to power the new buildings. A nearby tourist park will also follow.

The facilities will cater to the growing demand for high-end tourism, especially among Vietnamese and Chinese visitors facing gaming restrictions at home.

“This is a holy place,” says a middle-aged man, who asked not to be named. “There are so many records and religious history, donated by kings and dignitaries. This is one of the most important places for our culture.”

He worries about the absence of visitors, the dwindling land and damage to the building, but says there is no mechanism available to them for making complaints. The Ministry of Cult and Religion, he says, has done nothing to protect the institute.

Parts of the wall and main gate intended to protect the institute from incursions were torn down last month with the consent of the ministry, leading to a protest march led by monks on May 29. The ministry denied accusations by the monks that the land for the electricity substation had been leased or sold to the casino. Ministry spokesman Seng Somony said the construction was necessary to promote development in Cambodia, and that the boundary wall would be rebuilt after Naga 2’s completion.

Somony also said that the ministry itself might abandon its home on Preah Sihanouk Quay and move to a seven- or eight-storey building on institute land. The ministry this week could not be reached to answer questions on the matter.

Considered the world’s key research centre for Khmer studies, the institute is involved in the preservation, scanning and cataloguing of ancient Khmer manuscripts, as well as publication, research and international workshops. Founded with French support in 1930 by King Monivong, the institute became a centre for the preservation and development of Cambodian national culture, and was the country’s first major publisher.

The institute’s journal, Kambuja Soriya, which is still being published, brought classical literature, religious works and folk tales. The country’s first Khmer newspaper, Nagara Vatta, was co-founded by institute librarian and nationalist Son Ngoc Than, who would later become prime minister. Other publications include the 110-volume Tripitaka translated from Pali, collections of Khmer legends and the first Khmer dictionary, which is still being updated and used, with an app for mobile phones. The current cream-coloured building opened in May 1998 on its one-hectare site.

“The land belongs to Buddhism,” said But Buntenh, founder of the Independent Monk Network for Social Justice. “Someone can’t just give it away without the consent of the sangha. King Norodom Sihanouk gave this land to the institute, and the Ministry of Cult and Religion must stop giving land away to companies.”

He pointed out that the institute is in grave danger of being relocated. “The government has already spoken about moving the institute to Boeung Snor, which is 18 to 20 kilometres away. This would violate our religion. We’ve learned a lot from the government,” he added. “They violate the law and take the land, like we saw at Boeung Kak.”

On the institute grounds, the middle-aged man glances to either side at the upturned earth and new concrete foundation, uneasy with the questions. “We don’t know what they’re planning. We’re never consulted, we have no say and we’re too afraid to complain because we know who the main investors are and how powerful they are.”

NagaWorld’s Hong Kong-listed parent company, NagaCorp, has a 41-year monopoly on casinos within 200 kilometres of Phnom Penh, expiring in 2035, and a 70-year casino licence that runs until 2065. NagaCorp reported profits of $140 million last year, despite the fact that hundreds of workers at NagaWorld went on strike in June, seeking a rise in their minimum wage from $80 to $150 a month. Courts ruled the strike illegal and ordered the employees to return to work.

NagaCorp pays no taxes on income or gaming revenue, only a fixed fee that last year amounted to 1.5 per cent of total revenue of $345m. The new $369m Naga 2 annex began construction in November and is scheduled to open in early 2016. The TSCLK complex – named after the company’s chief executive Tan Sri Dr Chen Lip Keong, a Malaysian who also serves as an economic adviser to Prime Minister Hun Sen – will house two hotels plus 18,000 square metres of retail space.

There will also be conference rooms and a theatre that can seat 4,000, 50 VIP suites, up to 300 gaming tables and 500 electronic gaming machines, according to company statements. The existing NagaWorld facility also has 1,000 hotel rooms, and regularly enjoys 90 per cent occupancy. The company is also developing a $350m casino hotel in Vladivostok, Russia.

The Phnom Penh developments have drawn the ire of historians aware of the institute’s contributions to regional religious studies.

“It is sad indeed to think of casino developments crowding out an institution that has had an important role in Cambodian history,” author and historian Milton Osborne wrote in an email. “It is intriguing to reflect that the Buddhist Institute was founded in large part to deter Cambodians – and Lao – from going to Thailand to pursue higher studies of Buddhism, a fact that says something about the pre-modern links that existed between Bangkok and the Buddhist sangha in both Cambodia and Laos.”

There has been no recompense for the noise and encroachment on all sides, adds another man in the group at the institute. “We can’t complete our research like this,” he says. “But our greatest worry is that we will be pushed out eventually, told to close and relocate. How can we compete with the casino money?”

The worst aspect of the construction, a third man says, is the message the development sends to the young and to the Buddhist community, that the country’s main centre for religious and literary research is being crowded out by a garish casino development. “It looks bad for the institute,” he says, “and for the state of Buddhist studies in Cambodia. What is the future of Buddhism if its past is treated like this?”

NagaWorld representatives did not respond to requests for comment.

The institute opens from Monday to Friday, 7.30 to 11am and 2.30 to 5pm. It’s adjacent to Hun Sen Park in Sangkat Tonle Basak, Khan Chamkamon. Visit www.budinst.gov.kh.