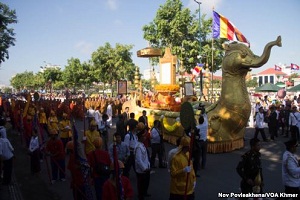 The honorary title, “Virtuous King for the Propagation of Buddhism in the World,”  was offered by unanimous decision at the Sixth Buddhist Summit in Japan, in December 2014.

Speaking at the ceremony, King Norodom Sihamoni called Buddhism “the perfect road for us to live by,” providing “a peaceful mind, happiness, peace and prosperity.”

Wednesday’s ceremony included a massive procession by monks, nuns and civil servants, along with visitors from Buddhist countries like Japan, Singapore and Mongolia.

Soy Botum, 35, a participant from Kompong Cham province, said that King Sihamoni has acted along the path of Buddhism, giving assistance to people in Cambodia’s rural areas.

“Generally speaking, through the press and television, I see him as a king who gives a lot to the people, which could be reflected through physical action,” she said.

Cambodia is a constitutional monarchy, though Norodom Sihamoni, the son of the late King Norodom Sihanouk, has largely remained outside of politics since taking the throne in 2004. He presides over religious and royal affairs, including some international diplomacy and trips to meet Cambodians in the provinces.