Phnom Penh, Cambodia -- Over the past year, ARC has conducted a series of case studies on organisations run by, or working with, Buddhist monks and nuns on issues ranging through HIV, microfinance, local governance, conflict management, education, gender, health care and community forestry. 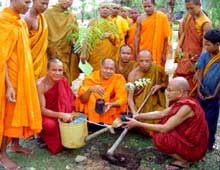 One of the most inspirational and effective is Buddhism for Development (BFD).

BFD was founded in 1990, at Site 2 Refugee Camp, on the Cambodian-Thai Border. Its founder was Indapanno Bhikkhu, and a group of monks who shared his vision of Buddhism as a tool for peace restoration and national reintegration, as well as the recovery of human rights and the building of democracy. Today it is run by the former monk, Heng Monychenda.

BFD works in eight provinces throughout Cambodia. Here are some of the projects it has engaged with.

2. MOTHER KARUNA PROJECT
The project is run on a voluntary basis by 28 Buddhist nuns in Battambang Province. It aims to improve the status of women as “mothers” of children, society, peace and development. Activities include counselling people living with HIV/AIDs, visiting hospitals; counselling women about domestic violence and giving emergency support to very poor families. It was started without any donor support, but in 2002 it became a part of BFD. It has generally been well accepted but sometimes nuns say that the villagers don’t want to meet them, because they think they are coming to ask for money.

3. "GOOD FRIENDS FOR SOCIETY"
The project works with teenagers, with the aim of promoting a sense of responsibility, increasing self-confidence, and giving them a place to discuss their problems, and prepare a “life plan” for themselves. Girls are ordained as Buddhist nuns for a month during their school holidays.

4. HEALTH AWARENESS PROGRAMMES
The aim is to reduce the occurrences of dengue fever , malaria, malnutrition, polio, HIV/AIDs and diarrhoea in the communities - through education and awareness of how to avoid these illnesses. The HIV/AIDs Home Care Outreach is particularly strong, using traditional Buddhist as well as modern counselling techniques. Monks and nuns also work with members of the community, to help reduce discrimination. Informal feedback during ARC’s visit suggests that patients draw tremendous encouragement from the fact that monks and nuns visit their homes. It also helps their family members, who learn how to look after their loved ones in their own environments.

IMPROVEMENTS FOR THE FUTURE
Monks and nuns often come from poor families and have a low standard of education, so they often need further training themselves, particularly in the area of social issues.

Some villagers have been known to criticize monks and nuns who are involved in this work, as they believe they should stay in the pagoda and pray. Others find it hard to accept monks working with projects involving finances and micro-credit, because it is seen to be inappropriate for religious representatives to engage with money at this level. And the issue of AIDs has also stirred some to worry that monks and nuns should not discuss sex – although as BFD workers remind them, the Buddha never prohibited monks and nuns from mentioning sex: Buddha used the Pali language, they say, but now monks and nuns can use these words in their own Cambodian language in a simple way to communicate with the people.

The idea of Buddhists engaging practically in their communities is a new one for many. As one worker commented, changing the conservative mentality of villagers is a slow process.