Kampot, Cambodia -- The dirt poor nation of Cambodia is providing spiritual richness to an Australian man. Paget Sayers was in the import-export business, until he retired a few decades ago. 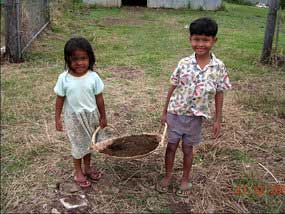 But now, pushing 80 years of age, he has found a new career and a new journey that fits with his Buddhist beliefs.

At the Kbal Romea school near the town of Kampot in southern Cambodia, young students are reciting their three-times tables.

It is the kind of scene you would expect to see at almost any school across the country. But there is something that sets this school apart - Paget Sayers is visiting.

The 78-year-old is a hero here after building rainwater tanks. Today he is on a mission to ensure that every child has his or her water bottle, and he is making sure the bottles are filled.

"We say it's just as important to wash your inside as your outside. So we've got to get them enthusiastic, and I hope they're gradually getting a taste for clean water," he said.

He was prompted to act when he discovered there was arsenic in the local wells.

"Some of the mothers were a bit nervous about 'Ooh, rainwater. Pond water is what we've been using. You know, boiled pond water, but a bit murky'," he said.

"We got a letter from the Pasteur Institute which said the water is fine, so the mothers are feeling pretty relaxed now about this nice clean water."

This part of Cambodia is not on any tourist trail. Mr Sayers was brought here in 2005 on a spiritual path. A practising Buddhist for 30 years, he was visiting temples and monasteries.

During his journey he came across so many that were locked up and neglected by the abbots. But here Abbot Chay Nhu was different.

"For me he's a fulfilment of what the Buddhist story is all about; being satisfied with life; being happy. You can tell he's happy because he's always laughing and smiling," said Mr Sayers.

"That's something that you don't always see in abbots around South East Asia and even Australia. Sometimes they're a bit grumpy.

"When it's finished I will thank you," he tells Mr Sayers.

There were three to begin with at one school, and now there are well over 1,000 in 170 schools.

He has also established informal schools near the local rice fields for children who cannot afford to attend or cannot make the journey to the local school.

Each time he visits this region there is a new school or a new program, and many new demands. But his focus never waivers from his Buddhist aims.

"You see a lot more monks now than you used to; there used to be not too many monks around cause a lot of them were killed. And now you see monks going out on their dhyana rounds in the morning," he said.

"So there's endless things we can do to take advantage of the synergy we've already created."