Lack of rules in the face of rapid expansion has left the robes of monkhood open to abuse by fraudsters and criminals: officialsPhnom Penh, Cambodia -- A RAPIDLY expanding and largely unregulated Buddhist clergy is giving the Kingdom's religion a bad name, officials say, forcing elders to address embarrassing crimes at the opening Wednesday of the 17th annual monk congress in Phnom Penh. 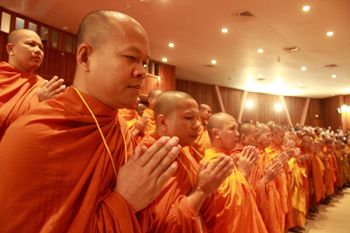 << Photo by: Heng ChivoanMonks pray at the opening of the 17th annual monk congress on Wednesday.

Men of the orange cloth have been caught robbing, raping and murdering in unconnected incidents across the country. Most recently, a 17-year-old monk made international headlines in November after he was accused of raping a British tourist in Battambang.

The crimes are leading religious leaders to demand more scrutiny of monks and their conduct.

He said he did not know how many cases had occurred this year but said that "offenses have happened throughout the country".

"Monks are accused of having mistresses," he said, adding that offenders would not be pardoned. "They must be defrocked."

Meas Nhel, deputy director of the Phnom Penh Department of Cults and Religions, blamed the offenses on "fake monks".

He said at least 11 criminal cases in 2008 involved fraudulent monks, including one case of murder, two cases of sexual abuse and eight cases of illegal fundraising.

"Many fake monks are seen to take Buddhism as a means to find money," he said. "Real Buddhist monks do not misbehave."

Meas Nhel said that some monks caught misbehaving had simply relocated from the provinces to Phnom Penh.

"To avoid such problems, we will ask each pagoda to inform an authority when there is a monk coming to stay in a pagoda," he said.

Min Khin, Minister of Cults and Religions, told reporters after the opening of the congress that the exponential increase in the number of monks was making regulation difficult and could lead to occasional instances of misconduct.

He said there have been widespread reports of misdeeds, and while he agreed that "a monk is also a human who cannot avoid [committing offenses]", he emphasised that real monks are rarely involved in such incidents.

"Only some pretending to be monks" had committed wrongdoings, he said.
TOP