Vientiane temple offers not holiday but lessons in life

Vientiane, Laos -- YOUNG boys spend their school holidays as novice monks in a Lao temple to learn about Buddhism. 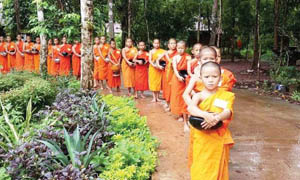 << Novices carry their bowls as they prepare to leave the temple for their morning almsgiving.

The chanting of more than 200 voices could be heard at Dongmakkhai forest temple as a group of young novices came together to pray as part of the annual Khoumhou Khou Khounnatha project recently.

The Khoumhou Khou Khounnatha (knowledge and virtue) project takes place during the school holidays each year at the temple in Xaythany district, Vientiane.

During this time, boys under the age of 17 spend 15 days as a novice monk. This year 200 boys took part in the project, which ended on Saturday.

Over the course of the 15 days, the young novices are compelled to wake up at 3:30am or 4am and then pray together for 30-50 minutes.

After that they have breakfast and then walk through the village to collect their daily food rations in their alm bowls.

In the early mornings, a long line of orange-robed novices can be seen making their way through the villages to collect alms from the residents before returning to the temple for further study.

Senior monk Pha Ajaan Keophachanh Yotpunya explained that he has resided at Dongmakkhai forest temple since he completed his monastic education in a neighbouring country, before deciding to launch this project on his return.

He thought that he would like to run this project in Laos because he wanted more young people to learn about Buddhism as it could help them to grow up with knowledge and virtue.

So Pha Ajaan Keophachanh started the Khoumhou Khou Kounnatha project when he first came to Dongmakkhai temple with just 30 novices.

But every year the number of novices taking part is increasing and this year there were more than 200 novices including new and old novices who joined the project.

Pha Ajaan Keophachanh said many small children don’t have many things to do for their school holidays so residing at the temple is a good option for them.

Some people have something to do such as study part time or help their families with work but many just stay at home and play with their friends.

Especially recently, most young children prefer to spend their time using technologies such as computers and smartphones so it’s better that they should spend at least 15 days to study Buddhism, Pha Ajaan Keophachanh said.

“During these 15 days, they will learn a lot of things here such how to pray to Buddha, Buddha’s story, Buddhism’s laws, the merits of parents and adults, as well as chanting,” he said.

All the novices who join this project must pass the Sin Ha (five precepts) because it’s very important for any Buddhist and so, every day, novices have to do everything together and take full responsibility for their actions and their being.

Living with 200 people is not easy, so this project also teaches those young boys to have patience and to respect each other.

For sustenance, normally the novices eat a rice platter but there are many people to cater for.

The food donated by the villagers is not enough on its own so every day the temple has to spend around one million kip ($123) purchasing food and supplies from a nearby market.

It’s not easy to teach small children but it’s also not difficult because young children find it easy to believe something so you just need to talk very softly to them, the senior monk advised.

“I can see that many of them changed their minds when they were here and I believe that they can earn a lot of merit, especially merit for their parents because every year, many children cry when we chant about mothers’ merits,” Pha Ajaan said. “Normally, when tears come from their eyes it means they are getting sad but I’m happy to see these novices crying while I’m chanting about their parents’ merits because now they are seeing what their parents have done for them.”

Vientiane Times asked some of the novices what they had learnt during their time at the temple.

They said they’ve learnt a lot of things such as making merit, being kind to one’s parents, making new friends, broadening their knowledge, getting closer to Buddha, and in general opening up their hearts.

Novice Phisith Sithphaxay from Dongsanghin village in Xaythany district said this is the second time he has taken part in the project. This time he also told a few friends about it and some of them signed up.

“In previous years, I just stayed at home for the holidays or played with my friends and learnt a bit of English in the evenings, which I don’t think was the best way to spend my time,” Phisith said.

He would like to recommend this activity to friends, especially those who aren’t busy during the holidays, as it would really benefit them in terms of learning about Buddhism. They won’t regret it if they come here, he assured.

“In previous years, some of them wanted to continue to live as novices after the project ended but I was very sorry we could not take them as our temple is still small, so some of them went back home and some continued in other temples,” Pha Ajaan said.
TOP