Hanoi, Vietnam -- If you get the chance to visit the northern province of Bac Giang, you should not miss the opportunity to take in the sacred landscape around Bo Da Pagoda in Thuong Lat Hamlet, Tien Son Commune, Viet Yen District. There you can see Buddhist woodblocks and ancient architecture that has been preserved for hundreds of years. 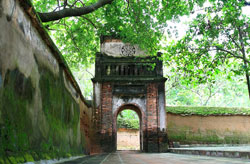 << Like a prayer: The entrance to Bo Da Pagoda.

The pagoda, also known as Quan Am (Goddess of Mercy) or Bo Pagoda for short, lies at the foot of a pine-covered hill, surrounded by earthen walls with mountains and rivers in the distance.

Legend has it that the Goddess of Mercy helped a poor childless couple there. One day, the husband was cutting pine trees at the top of the mountain when 32 gold coins suddenly burst from a tree. An enlightened monk told him that it was a miraculous appearance of the Goddess. The woodcutter entreated the goddess to give him a son, saying that if she did so he would build a pagoda to worship her. The woodcutter's wish was fulfilled, and he built a pagoda just as he had promised. Many other people have also gotten their wishes fulfilled by praying to the Goddess in this pagoda, so it is named Quan Am Pagoda.

The pagoda was built in the 11th century under the Ly dynasty, the golden age of Buddhism in Viet Nam, but was badly damaged during wars in subsequent centuries. It was not until the revival of the Le dynasty under King Le Du Tong (1705-28) that the pagoda was reconstructed and more or less retains the shape it has today.

Bo Da is a centre of Lam Te Buddhism and has a major role in the promotion and development of Buddhism in Viet Nam. Every year, the pagoda attracts many monks and believers from across the country who come here to meditate and learn this faith.

Compared to other pagodas in the North, Bo Da is unique for its architecture: while it appears to be a closed complex from the outside, on the inside the pagoda has hundreds of compartments that all open into one another. The pagoda provides visitors with a sacred, secluded refuge from the outside world.
The pagoda's walls and gates are made from packed earth – 0.8m thick and 2-3m high. This is an ancient building technique which distinguishes this pagoda from many others.

The walls, tiles, big water jars, and decorative pots in Bo Da all have a distinct brown soil colour.

The pagoda is also home to many documents, objects and antiques which have great value in terms of culture, history, architecture and fine arts. These include a bronze bell, a stone stele, a horisontal lacquered board engraved with Chinese characters, and a pair of wood panels on which are inscribed parallel sentences.

Because of the great influence of Lam Te Buddhism, most of the pagoda's famous carved woodblocks bear the Sutras of Zen Buddhism.

In the 18th century, the monks at the pagoda carved Buddhist Sutras on wood to preserve the texts so they could be used for the teaching of Buddhism. Over 2,000 Sutra woodblocks are arranged on eight bookcases.

Large blocks are laid on the tables so that visitors can see them easily. The woodblocks are 44cm long, 22cm wide and 2.5cm thick.

Some of them are larger, measuring 150cm long, 30cm wide and 2.5cm thick. If all the Sutra woodblocks were laid side by side, they would cover an area of 250sq.m.
All the blocks were carved on thi wood (decandrous perssimmom) that is both light and pliable – perfect for carving and moving – and durable. To this day, hardly any have rotted.

"For us, the most interesting part of the pagoda was the field of old tombs along the hill, which are said to belong to the chief monks of the pagoda and some others," said visitor Nguyen Thanh Hoa.

Outside Bo Da Pagoda is an 8,000sq.m Tower Garden encircled by an old brick wall.

"The towers here are made of stone and solid brick, coated with lime, molasses and wood-pulp and arranged layer upon layer," Hoa added.

Most of the towers are 3-5m high and have three or four storeys. Inside 97 towers is the bone-ash of more than 1,000 monks of Lam Te Buddhism. These towers, inscribed with the days of birth and death of the monks, are a valuable source for researchers of Lam Te Buddhism.

With its many tower tombs, Bo Da's Tower Garden is considered the biggest and most beautiful in Viet Nam.

Hoa said he was lucky enough to participate in the Bo Da Festival, which is held annually on February 16-17 of the lunar calendar. The festival attracts thousands of monks and visitors nationwide and involves both prayer and sightseeing.
"Besides going sightseeing, I had the chance to enjoy famous folk music and songs performed by local artists," said Hoa.