Admire the unique beauty of a Khmer Buddhist temple

Bac Lieu Province, Vietnam -- Being considered one of the most beautiful Khmer Theravada Buddhist temples in the Mekong Delta, Ghositaram pagoda in Bac Lieu province has unique decorations, reflecting unique Buddhism cultural identity of the Khmer. 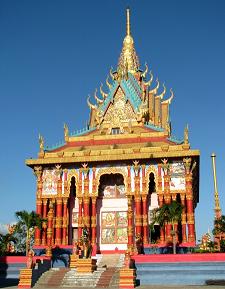 After about 10 years of construction, the main hall of the temple was inaugurated in mid-2010. The main hall has an area of more than 400m2, about 40m high, has many relieves, sculptural works and mural paintings with unique patterns of high artistic value.

In addition, in the temple campus there are two columns of over 40m high and two towers preserving remains of Buddhists, which also have beautiful decorative features.