Hanoi, Vietnam -- A youth leader affiliated to the banned Unified Buddhist Church of Vietnam (UBCV) said Thursday that he has been placed under house arrest after he was detained and interrogated for 13 hours, in the latest religious crackdown in the one-party Communist state. 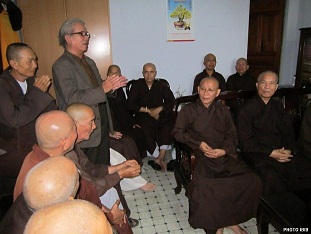 Le Cong Cau, head of the UBCV's Buddhist Youth Movement and an active coordinator of human rights issues in the North Central Coast province of Thua Thien-Hue, said he was detained on New Year's Day before he could take a flight to Ho Chi Minh City to meet with UBCV leader and prominent dissident Thich Quang Do.

He said security officers whisked him away from a plane at Phu Bai Airport near Hue, the provincial capital, and seized from him Do's laptop computer and UBCV documents, which they deemed as illegal.

From the airport, he was driven to the Truong An district police station in Hue where he was interrogated for 13 hours and accused of breaching various laws before he was placed under house arrest.

"Before they let me go, they told me, 'Now you know you have violated laws and so from now on, we'll follow you very closely,'" Cau told RFA's Vietnamese Service. "They said I was not allowed to leave my house and can't meet anybody."

Police outside his home

He said there were 15 to 20 policemen guarding him from outside his home.

"I can't go out," he said, speaking from his residence. "There are many policemen outside. They sit in the cafe across the street. Sometimes they enter the house. Some wear uniforms, some don’t."

Cau said during his interrogations, police told him that the UBCV was not recognized by the government and "by working with the church I violated the law."

"I said I did not violate any law because our church is legal but that [the authorities] had deprived us of our right and legal status."

Cau's arrest has been condemned by rights groups.

Paris-based group, the International Federation for Human Rights (FIDH), and its member organization, the Vietnam Committee on Human Rights (VCHR), expressed serious concern over the arrest and detention.

“Arresting Le Cong Cau for simply attempting to visit to an elderly monk is a serious violation of the right to religious freedom,” said VCHR President Vo Van Ai.

“Vietnam will host the UN International Vesak Day [Buddha’s Birth] in May this year and the Vietnamese government claims to respect the rights of Buddhists. It should demonstrate its commitment by immediately releasing Le Cong Cau and Thich Quang Do from house arrest,” he said.

“Arbitrary arrests and detention targeting independent Buddhist groups and other religious communities must cease and their members must be immediately and unconditionally released,” he said.

The Buddhist Youth Movement (BYM) headed by Cau is an educational organization affiliated to the UBCV with about 500,000 members in Vietnam.

Although the UBCV is banned by the Communist authorities, BYM has a semi-official status because of its widespread social, humanitarian, and educational activities, which are tolerated by government.

This is not the first time Cau had been arrested.

He was held in March 2013 and interrogated for three days because he posted articles on the Internet calling on the Vietnamese government to restore UBCV’s legal status and cease repression against UBCV members.

Police accused him of “undermining the unity policy” and “circulating anti-state propaganda” under Articles 87 and 88 of Vietnam’s Criminal Code. Those offenses carry prison sentences of up to 15 and 20 years respectively.

Authorities have arrested, charged, detained, or imprisoned hundreds of dissenting voices over the years Vietnam. This includes bloggers, labor and land rights activists, human rights defenders, and those calling for peaceful democratic reform. Members of religious groups have also been targeted.

Since the beginning of 2012, at least 65 peaceful dissidents have been sentenced to long prison terms in some 20 trials that failed to meet international standards, rights group Amnesty International said.