Busan, Korea -- One of largest temples in South Korea, Sam Kwang Temple in Busan witnessed the hosting of the first Buddhist retreat for the Vietnamese community residing here. The event - organized by Chuyen Tu Monastery (Ba Ria–Vung Tau province, Vietnam) - was to enable participants to be engaged in Dharma practice. 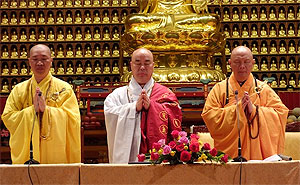 Held between April 4th and 5th, 2015, the retreat gave participants invaluable experience of a temple stay at no charge. Practitioners had to follow strict schedules. Activities held include chanting of sutras, walking meditation, confession of faults and listening to Dharma talks

Practitioners also took refuge in Triple Gem and were prescribed the Five Precepts by the Sangha.

About 1,000 applications from Vietnamese all over the world - from Korea, Finland, USA and Vietnam - were received to participate in this retreat.