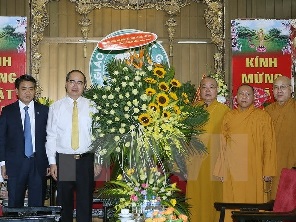 The VFF leader stressed Buddhism’s long-lasting tradition within the nation and its contributions to the tradition of patriotism as well as to national construction and defence.

Vietnam was now home to more than 48,000 Buddhist monks and nuns who are practicing the religion in over 17,000 Buddhist worshipping sites with each receiving up to 1,000 followers annually, Nhân noted.

Many monks have sat as National Assembly deputies, helping convey the voice of Buddhists nationwide to the legislature, he said, adding that Buddhism’s strong development has mirrored religious freedom in the country.

Recalling Vietnam’s hosting the UN Day of Vesak (the Buddha’s birthday, Enlightenment and Passing Away) in 2014 and 2008, Nhan said through the event, international friends understood more about Buddhism as well as the Vietnamese land and its people.

In 2015, 40 religious organisations and the VFF signed a co-operation programme for the first time, under which they committed to join hands in protecting the environment and coping with climate change during 2016-20.

On the occasion of Buddha’s 2,560th birthday, the VBS’s Supreme Patriarch had also appealed to Vietnamese Buddhist followers to engage in environmental protection and climate change response, he said.

Most Venerable Thích Thanh Nhieu, permanent deputy president of the VBS’s Executive Council, reassured that the council and Buddhist followers at home and abroad would always unite with each other to carry forward the fine traditions of Vietnamese Buddhism, and make more contributions to national construction and defence, environmental protection, and climate change combat.
TOP