Ho Chi Minh City, Vietnam -- Government authorities in Vietnam’s Ho Chi Minh City have destroyed a Buddhist pagoda from which they recently evicted monks, and have moved all of the temple’s contents to another location, the head of the religious institution said Monday. 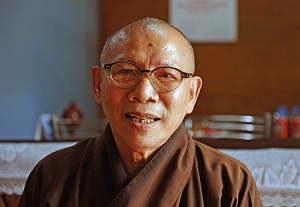 On Sept. 8, authorities forcibly removed all monks from Lien Tri Pagoda, which belongs to the Unified Buddhist Church of Vietnam and is located in district two of the city’s An Khanh ward, to clear the land for a lucrative development project. The Vietnamese government does not recognize the church.

“Lien Tri Pagoda is more than 70 years old, but they’ve destroyed the entire pagoda, and now it has become empty land,” Thich Khong Tanh, the resident abbot in charge of the pagoda, told RFA’s Vietnamese Service.

He has argued that only the city - not the district - has the authority to take the religious institution’s land.

Authorities took away all the site’s Buddha statues, pictures, furniture, and boxes containing  human ashes to the city’s Cat Lai area, where they have decided to relocate the pagoda and monks, he said.

Placing a deceased person’s ashes in a pagoda following cremation is one of the three ways to dispose of the remains according to Buddhist tradition.

“Some people took pictures of the pagoda, which now is just a derelict place where everything has been destroyed,” Tanh said.

After the most recent eviction order was issued on Sept. 5, the thousands of people who worshipped at Lien Tri Pagoda had to go elsewhere, he said. Only a few hundred continued to go there until the place was destroyed.

“I had said before that if they eliminated the pagoda, I would become a monk without a pagoda just like a homeless person,” Tanh said. “I may have to apply for refugee status because I have no place to stay.”

Government want to 'eliminate us'

So far, the abbot has refused to sign an agreement with district officials to take over the new place they assigned to the monks.

“I said before that I would not accept it even if the government offered us 100 billion Vietnamese dong (U.S. $4.4 million), he said. “We don’t want to sell the pagoda or trade it for anywhere else.”

“The government just wants to eliminate us, using hundreds of policemen to evict us despite our protest,” he said.

District officials have been threatening to close the Lien Tri Pagoda since August 2014, when they sent resident monks an initial notice after Vietnamese authorities declared their intention to tear down the structure along with two Christian churches to make way for the development scheme.

Authorities had offered a payment of 5.4 billion Vietnamese dong (then about U.S. $274,000) in compensation for the pagoda and its land. But Tanh refused to accept the money, saying that authorities were using the clearance order to eliminate the pagoda because it did not belong to the government’s own state-controlled Buddhist church.

Besides serving as a place of worship, the pagoda provides shelter to many rights activists and victims of injustice who go to the city to pursue their quests for justice with government authorities.