Ha Noi, Vietnam -- The Vietnamese Buddhist community has expanded by ten times since the establishment of the Viet Nam Buddhist Sangha (VBS), remarked a top VBS dignitary in his article run by the Sai Gon Giai Phong (Liberated Sai Gon) on Nov. 3. 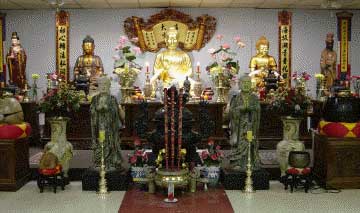 The Most Venerable Thich Hien Phap, Deputy Chairman and General Secretary of the Executive Council of the VBS's Central Committee, began his article by quoting a well-known saying of the late Most Venerable Thich Tri Thu, former Chairman of the VBS Executive Council: "History always advances forwards, today will become the past of tomorrow. We always respect, study and inherit achievements made by predecessors, but we don't need to repeat the past." The late Most Venerable also said everybody should unite for the propagation of the Dharma and the interests of the nation.

The Most Venerable Phap stressed that history has turned over a new chapter and all Buddhist followers should join each other to write new pages of the Vietnamese Buddhist history in the 21st century and following centuries." Each person has his/her own thinking but we should share a common goal of the everlasting Dharma and nation," he wrote.

The monk reviewed part of the Vietnamese Buddhist history, from 1930 up to now, which can be divided into three periods. In the first period from 1930s to 1940s, movements to revive Buddhism prevailed with the founding of many Buddhist organisations such as the Southern Buddhist Studies Association (1931), the Luong Xuyen Buddhist Association and the Central An Nam Buddhist Association (1932), and the Buddhist Union (1933). From 1950, Vietnamese Buddhism began to develop along with the struggle against foreign invaders for national liberation. In this period, the idea of forming an unified Buddhist organisation became prominent with the establishment of the National Sangha Church of Viet Nam in 1952.

Since then, the VBS has set up a system of chapters from central to local levels. A training system has also been developed with three institutes, nearly 30 medium- and high-level schools and hundreds of basic courses nationwide. The Most Venerable Thich Hien Phap also noted in his article that Buddhist dignitaries have maintained close contacts with authorities at all level to smooth away any difficulties in order to facilitate religious deeds.