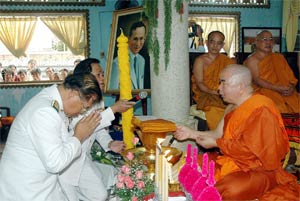 Attending the ceremony were Vietnam’s Buddhist senior clerics and representatives of the Vietnam Fatherland Front, the Thai Royal Family, the Thai Embassy in Ha Noi, the Thai Consulate in Ho Chi Minh City, as well as Thai and Vietnamese Buddhism followers.

The offering came on the occasion of the Vietnam Buddhist Sangha’s 25th anniversary on November 7.

The Thai King, who is in the 60th year on the throne, has offered Buddhist robes to Pho Minh Pagoda in Go Vap District two times so far.