Ho Chi Minh City, Vietnam -- Eighty-year-old monk Thich Nhat Hanh has been back in his native Vietnam for a month, holding a series of ceremonies aimed at healing the wounds of the Vietnam War. In the 1960's, Hanh was one of the leaders of South Vietnam's Buddhist "struggle movement," which opposed the war and the South Vietnamese government. 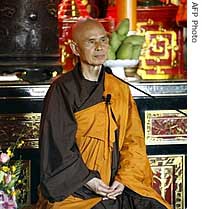 << Zen Buddhist leader Thich Nhat Hanh sits at the opening of a three-day requiem for those killed on both sides of the Vietnam War, 16 Mar 2007

He was later exiled, and few of today's Vietnamese remember him from that era, but many are attracted by the modernized form of Zen Buddhism he has brought from the West. Matt Steinglass reports from Ho Chi Minh City.

Thich Nhat Hanh leads thousands of Vietnamese in prayer rituals at Vinh Nghiem Pagoda in Ho Chi Minh City. The prayers are dedicated to the dead of both sides in the Vietnam War.

Hanh was an important figure during the war, one of the leaders of a Buddhist movement that staged huge anti-war protests in the city then called Saigon.

But almost no one in the crowd on Saturday knew of Hanh's actions in the 1960's.

Many, like Trang Tri Son, were born after the war ended in 1975, and were drawn not by Hanh's history in Vietnam, but by his fame in Europe and America.

Son says he has read that Hanh is among the 60 most important spiritual leaders in the world.

Hanh has lived mainly in France since he was exiled by the South Vietnamese government in 1966 for his anti-war activities. His Order of Interbeing has thousands of followers in monastic communities there, and in the American states of Vermont and California. His philosophy centers on what he calls "mindfulness:" focusing on what one is doing, not being so distracted by material things that one allows life to pass by.

Brother Phap Lo, a Swede who is one of dozens of Western followers who accompanied Hahn to Vietnam, explains.

"We're trying to find ways of using the teachings of the Buddha and our teacher so that we can live more happily and peacefully, whether it's as a therapist or at an office," he said. "We want to live more simply, taking better care of the earth and each other."

It is a philosophy well suited to the spiritual needs of harried Westerners. As Vietnam turns to capitalism and the pace of life increases, it is a philosophy that also appeals to today's ambitious Vietnamese professionals.

"Buddhist philosophy is usually negative, because life is sorrow," said Chau. "But for Thich Nhat Hanh, life is positive. We breathe, and we smile - this is the name of the program. And it's quite interesting to combine into our business life."

This is Hahn's second return visit to Vietnam. The first came in 2005, 39 years after he was exiled for his actions against the war.

In 1965, he founded the Youth School for Social Services in Saigon. At the time, South Vietnam was not only fighting a war against the communists, it was also torn by conflict between the mainly Catholic government and the Buddhist movement to which Hanh belonged.

The movement opposed the war, and some of its monks burned themselves alive in protest. Hanh wanted to form a peaceful "third force," training Buddhists in agriculture and medicine, and sending them out to poor villages to start development projects.

Nguyen says in May of 1967, someone threw a grenade into one of the classrooms, killing two female students. Two weeks later, eight students disappeared from a village and were never seen again. In July, five students were kidnapped and shot.

Nguyen says the students might have been killed by either side. The government thought Thich Nhat Hanh was a communist. The communists thought he was a CIA agent.

By the time of the attacks, Hanh was already in exile. He traveled to the U.S. in 1966 to build links with the American anti-war movement, and convinced Martin Luther King, the American civil rights leader, to speak out publicly against the war.

For his efforts, the Saigon government barred him from returning home, and after North Vietnam defeated the South in 1975, the communist government continued the ban.

Hanh stayed in the West, building up an entourage of Zen monks and devoted lay followers.

Older Vietnamese have been drawn on this visit by Hanh's attempt to heal the lingering trauma of the war. At Vinh Nghiem Pagoda on Saturday, 75-year-old Vu Thi Quy said the bitterness remains.

Quy says she gave eight thousand dollars last year to monks at another pagoda to pray for the family she lost in the war. Her father-in-law died in a communist prison, and one of her daughters perished while trying to flee Vietnam by boat in 1978.

Quy says she, like many Vietnamese, remembers nothing of the Buddhist movement of the 1960's. But other shared memories have not disappeared. When Hanh and his followers began chanting last weekend, thousands of Buddhists showed they still know the tunes.