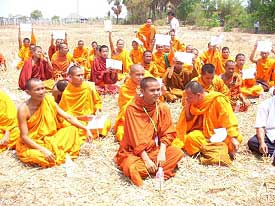 I, on behalf of the Khmers Kampuchea-Krom Federation (KKF) representing the indigenous Khmer-Krom people of the Mekong Delta (South Vietnam) and the Khmer Krom diasporas around the world, would like to seek your immediate attention and support in ending the unjust prosecution of Khmer-Krom Buddhist monks, in Soc Trang province in South Vietnam, for the alleged crime of organizing and participating in a peaceful demonstration partaking with 200 Khmer-Krom Buddhist monks on 8th February 2007 to request for religious freedom.

The two hundred Khmer-Krom Buddhist monks taking part in the demonstration and members of their immediate families have been and continue to be subjected to elevated acts of intimidation, harassment, and oppression as Vietnamese authorities continue to crack down on human rights related activities.

Currently, three disrobed monks (Kim Muon, Ly Suong, and Thach Thuong) are still imprisoned in the unknown location. The other six disrobed monks have been released but are under housearrested.

Forced disrobement of these Buddhist monks continues to be used as a discriminatory means of punishment against these monks for taking part in a non violent demonstration. It serves to further prohibit the rights of the Khmer-Krom Buddhist monks and civilian to practice their religion and customs according to their indigenous ways. Such acts can also be seen as means to undermine the minority communities and to halt the important role that Buddhist monks play in preserving and passing of the Khmer-Krom language, customs and values.

Mr. Prime Minister, Vietnam is a member of the United Nations and now officially became a member of WTO. I would like to appeal for your support to:

Mr. Prime Minister, if your government does not release our Khmer Krom Buddhist monks, the Khmer Krom in Kampuchea Krom and around the world will continue to protest until they are safely released and continue to freely practice their religion as stated in Vietnam’s Constitution and the Universal Declaration of Human Rights.