A mountain of ZEN

Yen Tu Mountains, Vietnam -- You might miss out on the panoramic view, but climbing to the top of Yen Tu mountain during rainy season is the best way to stay cool. 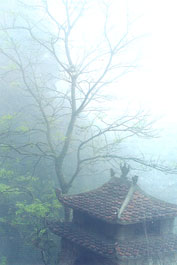 But I’d rather climb a mountain in cool weather – albeit under heavy rain – than hoof up in the middle of a heat wave. The summer in Vietnam is not so forgiving of pilgrims.

On the road from Hanoi to Yen Tu mountain in Quang Ninh province the downpour is relentless. When I arrive at the foot of the mountain at nine in the morning, the area is deserted. The car park is empty. Hundreds of food stores and souvenir shops along the way to the cable station are mostly closed. None of vendors or beggars that normally gravitate around can be seen.

I can’t resist firing off a quick text to my friend back in Hanoi, “Monsoon is the perfect time to visit. I have the place to myself!” Perhaps it is fitting, to make this expedition on my own. This is a place of meditation and reflection. There’s no need for chit-chat or socialising along the way.

Yen Tu has been an important Buddhist pilgrimage site since the 13th century. It is a place of devotion, steeped in legend and covered in pagodas and religious relics.

At the foot of the mountain by Giai Oan stream an inscription reads, “This marks the spot where the royal women threw themselves into the river to show their loyalty to the king, upon his decision to leave the court and become a Buddhist hermit.”

That king was Tran Nhan Tong, who abdicated his throne in 1278 in favour of his son, and set off into the wilderness. When he reached Yen Tu mountain, he instructed his followers to turn back, as he intended to devote himself to the solitary study of Buddhism. After he vanished the women who had accompanied him threw themselves into the river.

The mountain had first become a religious site after a Taoist hermit from China by the name of Yen Ky Sinh happened it upon it in the 10th century and declared it the ancestral land of the Vietnamese Buddha.

When Tran Nhan Tong arrived he didn’t forsake his gift of leadership entirely. He founded a sect Truc Lam Yen Tu, the first Vietnamese Buddhist Zen centre, which in time attracted thousands of followers and he ordered hundreds of constructions on Yen Tu Mountain. His successor, Phap Loa Dong Kien Cuong (1284 - 1330) maintained the construction work rate and Yen Tu remained the focal point of Vietnamese Buddhism through the Le and Nguyen dynasties.

Heading to the top

Easing the hardship of one’s pilgrimage, since 2002 there’s been a cable car to ferry visitors halfway up the mountain to the Hoa Yen pagoda. But first I explore around the bottom of the mountain by following the old stone track though the Giai Oan springs and under the century-old pine-trees where the flagstones have been worn down the pilgrims’ footsteps.

The trees act as a canopy so even under the heavy deluge, I can do without a raincoat. When I start to tire I think of the monks who once carried thousands of large rocks along this route to build temples or pathways.

Then almost guiltily I head for the cable car that will take me up the mountainside in less than 10 minutes.

Leaving the cable car, first I climb to Dragon’s forehead mountain (or Pearl mountain) to the Tower Garden where an ancient moss-covered stone tower dedicated to Tran Nhan Tong can be found. At the two sides of the tower there are two small but deep ponds filled with clear water, which are called the dragon’s eyes or pearl wells by locals.

Here I am not alone. Around the garden, several groups of archaeologists are digging around the stone towers in search of earth-covered relics.

At Hoa Yen pagoda I sit down in the breezy yard to eat lunch and bask in the peacefulness of the setting. The mountain is quiet enough to enjoy the sweet sound of the birds and the unceasing sound of insects. The pagoda bell resounds throughout the forest. Sitting under the shade of bamboo and pine-trees, I am close to feeling ‘Zen’.

With the thick fog and cloudy weather, the steep ascent to the top is not easy. But with a bamboo stick as an aid, I press on to the One-roofed pagoda, Bao Sai pagoda, Van Tieu pagoda, then the Yen Ky Sinh temple, and finally to the Bronze pagoda on the top of Yen Tu.

I only come across a few employees of the Yen Tu cable-car company, who are out collecting rubbish, a few locals picking bamboo shoots and a woman behind a small kiosk flogging soft drinks and snacks.

Despite the lack of business, the kiosk owner Loan seems quite content.

“Yen Tu residents are very hospitable, honest and simple. We live in the land of Buddha so we try to live with good behaviour,” she says, pouring me a hot cup of tea.

The higher I climb the wetter and mistier it seems to become. To lighten my load I leave my bags with Loan before tackling the summit.

From Loan’s booth to the mountain top, I only meet the odd chicken. Silence surrounds me. I’m not afraid of the solitude, I feel total calm. It’s not hard to imagine how monks in the 13th century felt enlightened in such a place.

At the peak of Yen Tu, in front of Bronze pagoda where once Tran Nhan Tong sat to meditate amongst the clouds, I sit cross-legged and close my eyes and quietly reflect. There are countless pagodas in Vietnam but sitting here I feel a tranquility I have never known.

It was my grand mother who inspired me to come here. It had been a lifelong dream for her to come here. She announced when she returned after conquering Yen Tu that she could now “die without any regret’.

She climbed up without the aid of the cable car. Her belief and faith gave her all the strength she needed to climb to the top. At the time, she was 80 years old.