Vietnam getting Ready for Buddha's Big Day in Hanoi

Over 30 members from more than 20 countries gathered  at Vietnam Buddhist University in Ho Chi Ming City to plan the grand celebrations at Hanoi.

Ho Chi Ming City, Vietnam -- Buddhist Monk Su Giac Hoang travelled hundreds of miles away from his remote monastery to Ho Chi Minh City to be part of the preparations under way for the United Nations Day of Vesak 2008. He finds it hard to believe that Vietnam is hosting one of the world's most important and biggest Buddhist events in Hanoi next year. 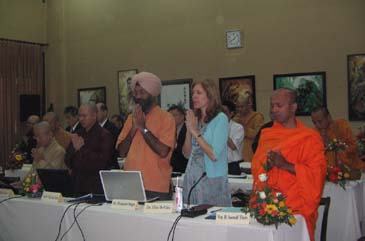 << IOC members standing in deep reverence to the Triple Gem, before starting the two-day preparatory meeting.

"All my monk friends and nuns are excited about it. It is a day of great significance for the Buddhist clergy and lay people. I came to serve and assist in making this event a great one for Vietnam," a cheerful Hoang said.

The two-day preparatory meeting of the International Organising Committee (IOC) for the United Nations Day of Vesak (UNDV) 2008 was held last month at the Vietnam Buddhist University in Ho Chi Minh City.

Over 30 IOC members from more than 20 countries including the USA, Australia, Italy, Russia, Japan, China, Singapore, Taiwan, Indonesia, Malaysia, Thailand, Myanmar, Cambodia, Sri Lanka and India chalked out grand plans for the UNDV celebrations to be held in Hanoi from May 13 to 17 next year. About 4000 Buddhists from all over the world would gather for the celebrations.

The scene at the meeting's venue was marked by religious fervour and meticulous planning. The meeting started with homage to the Triple Gem — the Buddha, the Dhamma and the Sangha— with all the IOC members standing up for prayers in deep reverence. The enthusiasm amongst the participants was palpable.

United Nations in a resolution in 1999 decided to celebrate the thrice-sacred day of Vesak in the month of May. The first celebrations were held way back in the year 2000 at the United Nations Headquarters in New York. Subsequently, these celebrations have successfully been held in Bangkok since 2004.

The celebrations will commemorate the 2252nd Year of the Birth, Enlightenment and Passing Away of the Buddha Gautama. The event is seen as an opportunity to spread worldwide the Buddha's message of peace, love and harmony for the welfare of humanity.

"World Buddhist leaders would deliberate over the problems faced by the humanity today. The problems like war, conflict, poverty and violence will be discussed, while seeking a Buddhist perspective and contribution towards building a just, democratic, and civil society," he said.

Venerable Nhat Tu added: "Things are moving smoothly. Every one is working very hard. After all it is a moment of rare honour for the Vietnamese people."

The celebrations would emphasise Buddhist and cultural values of Vietnam. Vietnamese traditional cultural shows and Buddhist cultural exhibitions will be organised at the conference venue as well in the Temples' premises in Hanoi. There will be religious chanting from different Buddhist traditions. Special activities like cultural fairs, food fairs and cultural activities will also be held for the local people's participation.

The world's distinguished Buddhist scholar and master Venerable Dr. Bhikkhu Bodhi from the USA would deliver an opening keynote speech on the main theme of the celebrations. The UN Vesak Day ceremonies will be opened by the President of Vietnam.

A special speech will be delivered by the Prime Minister of Vietnam during the closing ceremony and he would host a dinner for the 150 distinguished Buddhist leaders and scholars.

Noble Laureate Professor Amartya Sen is expected to speak on Buddhist perspective on economics and welfare development. While a candle-lit procession for world peace and progress will be organized after the closing ceremony, joined by all the delegates and local people.

The awareness about the Vesak 2008 celebrations is catching up with the young and old alike in Ho Chi Minh City and around the country, following large media coverage of the approaching event.

Bhikkhuni Lien Viet says she has been reading about celebrations in newspapers and along with her friends is looking forward to the celebrations. "We look forward to meeting and benefiting from interaction with the Buddhists from across the world. We all are excited," she said.

A 58-year-old library assistant, Tu Y, finds her emotions too strong to hide: "People not only in Ho Chi Minh City , but throughout the provinces are getting ready for it. They think about it and are waiting for it."

This big event being held in vietnam for the first time offers both an opportunity and challenge to the Vietnamese Buddhists. Professor Elise De Vido, an IOC member from Taiwan, said: "It is a great honour and challenge for Vietnam's Buddhist circles to plan such a large and important international event. I'm sure that the distinguished and hard-working members of IOC and those in Vietnamese Buddhist circles will succeed in bringing real breakthroughs for Vietnamese society, to communicate to Vietnam and the world how Buddhism can contribute towards a civil society."

Every Buddhist and particularly the Vietnamese Buddhist Sangha is putting all its resources and efforts behind the event it a big success, said Venerable Thich Nhat Tu.

In a rush of activity, contributing his own little but important part towards the success of Vesak 2008 celebrations, is busy monk Su Giac Hoang. He sums up the feeling among Vietnam's Buddhists and the Sangha: "Everyone realises the significance of this big day. So everyone is busy working towards the success of the Buddha's big day. I just can't wait to be there in Hanoi for the celebrations."