Vinh Phuc, Vietnam -- Truc Lam Tay Thien Zen Monastery is considered to be one of the most impressive and peaceful monasteries in Vietnam. 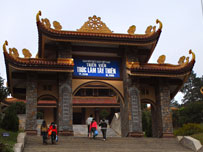 This Zen sanctuary is located on Tay Thien Mountain, which belongs to the Tam Dao mountain range in the northern province of Vinh Phuc.

Built in 2005 on the ruins of an ancient pagoda named Thien An Thien Tu, and using remains of that ancient pagoda’s floor, Truc Lam Tay Thien Zen Monastery sits majestically on the apex of the mountain, where from below the red tips of its tile-covered roof can be seen peaking through the pine trees.

The higher visitors climb up the sides of Tay Thien Mountain, the more the busy world of commerce below evaporates as the world of tranquility above pervades.

The sense of peace is palpable as visitors reach the impressive three-door gate in front of the monastery.

To transport the building materials from the lowlands to the top of mountain, workers initially had to build a passable road up the side of the mountain.

After the road was completed, the most skilled artisans and construction workers across the country were employed to build the monastery from April 2004 to November 2005.

Truc Lam Tay Thien Zen Monastery is very ornate, from carved pictures on the doors to embossed works on the wall, ceiling, and pillars, every detail was considered.

A two-ton bell was contributed by bronze casters from Hue while wood carvers from all over the country contributed panels and altars.

In addition to the monastery there are supporting buildings constructed in the ancient architectural style that house a library, a museum, a meditation house for monks and the Tam To Truc Lam temple.

Now that the Zen Buddhists are settled into their new monastery, they aren’t finished.

They are planning to build a 43-meter-high Buddha statue to place atop the mountain in honor of the Buddha’s birthday and in recognition of the Vesak Festival, the greatest Buddhist festival in the world, which will be held by the United Nations in May in Hanoi.

Dining with the monks

Visitors to Truc Lam Tay Thien Zen Monastery can enjoy a special meal with the monks while learning about the dining rites of the Zen Buddhists. The monks have rituals of thanks and homage before and after the meal.

Additionally, in order to not harm any sentient beings in honoring life and ancestry, the monks eat only vegetarian food.

For the Zen Buddhists, eating is considered the same as breathing and a means of maintaining the energy of life, so during meals they do not make any noise that could disturb others.

The monastery has 40 rooms for monks, nuns and pilgrims to stay in for one to two weeks while visiting to study Buddhism.

Just call (021)121 8300 if you would like to have a free stay here and learn about the discipline of the Zen Buddhist monks of Truc Lam Tay Thien Zen Monastery.