World to Watch Vesak in Vietnam

Hanoi, Vietnam -- Vietnamese Buddhist master Thich Nhat Tu sits with a group of monks in a temple room at 2am, planning meticulously for the Buddha's Big Day celebrations - the United Nations Day of Vesak 2008 (UNDV) in Vietnam. 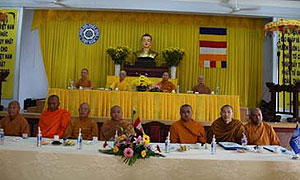 << Historic Moment: United Nations Vesak celebrations are an honour for Vietnamese Buddhists and the country.

He has just arrived from his monastery in Ho Chi Minh City to this hundreds of years' old Buddhist Temple in Hanoi, for attending the March Second Preparatory meeting of the International Organising Committee (IOC) for UNDV 2008.

This short and bespectacled hard-working master is also the secretary of IOC for the UNDV 2008 – the first-ever and the biggest Buddhist International event to be held in Hanoi from May 14 to 17. Realising the immense importance this international event holds for the Vietnam's Buddhists, government and the public, master Nhat Tu has been working relentlessly and has come to represent the face of Vietnamese Buddhist preparations for the event.

"It's a moment of great honour for the Vietnamese people and Buddhists to organise this sacred event of international scale. We all are working against the clock to ensure successful celebrations," stresses master Nhat Tu, as he keys in on his laptop, rapidly.

Buddhism has a long history of more than 2000 years in Vietnam. It witnessed certain turbulent periods in this country and many view the forthcoming international Vesak celebrations as an important opportunity, a sort of moment of revival for Buddhism.

United Nations in a resolution in 1999 decided to celebrate the thrice-sacred day of Vesak in the month of May. The first celebrations were held way back in the year 2000 at the United Nations Headquarters in New York. Subsequently, these celebrations have successfully been held in Bangkok since 2004. This is the first time that Vietnam got the chance and responsibility of hosting this international Buddhist event.

The UN Vesak celebrations this May will commemorate the 2252nd Year of the Birth, Enlightenment and Passing Away of the Buddha Gautama. The event is seen as an opportunity to spread worldwide the Buddha's message of peace, love and harmony for the welfare of humanity.

This year's UNDV celebrations in Hanoi mark an apparent shift from the previous celebrations in Bangkok, particularly in the choice of conferences' themes and approach, peculiar only to Vietnam's current social, political, economic and religious ground realities.

The Main theme of the conferences is 'Buddhist Contribution to Building a Just, Democratic and Civil Society,' with sub themes of current importance where Buddhism can make a difference are: climate change, family conflicts, war and healing, social change, Buddhist education, engaged Buddhism and Buddhism in the digital age. World-famous Zen master Thich Nhat Hanh is to organise a spiritual retreat for 400 participants during the celebrations.

IOC chairperson and vice-president of Vietnam Buddhist University, Most Ven. Professor Dr Le Manh That, saying that the Buddhist world is looking forward to UNDV celebrations in Hanoi, adds: "Local Buddhists are in high spirits too. After all, it's realisation of the long-standing wish of the Vietnam Buddhist Sangha.

The event points to the greater role we all can play in building a harmonious society. We are ready to welcome the world delegates."

Since the First IOC Preparatory Meeting in Ho Chi Minh City three months ago, the preparations about the UNDV celebrations have been able to generate tremendous enthusiasm among the Buddhists and as well as the general public throughout Vietnam, including big cities and remote provinces. People are waiting for the event with excitement and expectations, both from spiritual and cultural perspectives. The celebrations have been extended to include 54 cities and provinces by the government.

To facilitate the swarm of activities during the celebrations, the IOC, the Vietnam Buddhist Sangha and the National Coordinating Committee are working together to make the event a success, both locally and internationally. The support from the government is forthcoming as evident from the fact the National Coordinating Committee is being headed by the Deputy Prime Minister of Vietnam.

Ven. Dr T Dhammaratana, consultant to UNESCO and IOC vice-chairman, has expressed satisfaction with the ongoing preparations and thanked the Vietnamese government and Buddhists for their dedicated efforts towards the success of the event.

An IOC member from Australia, Dr Colin Butler, expressed confidence about the state of preparations: "I am feeling very enthusiastic as the workshops are coming out well. The workshops are focused, directly linked to the pressing issues that humanity is confronted with today. I see more acceptance of the Buddhist values worldwide, and am sure Buddhism can make a real contribution in solving the problems of humanity."

The celebrations are expected to enhance the moral, emotional and spiritual lives of the Vietnamese people, besides addressing the issues faced by humanity.

Consequently, local Buddhist leaders are leaving no stone unturned as they view UNDV celebrations as an opportunity to impress upon the world as to what kind of contribution Vietnam and the Vietnamese Buddhists can make both at domestic and international fronts.

Dr Elise De Vido, an IOC member from Taiwan, aptly sums up the UNDV's importance for local Buddhists: "Five years ago it would have been unthinkable of Vietnam holding this event. It shows how much Buddhist circles have worked to gain more voice and space in Vietnam. The conference in May is really a test for the Vietnamese Buddhists to prove themselves to their government and to the Buddhists world over. Vesak in May 2008 will be their chance."

Agrees IOC deputy secretary from Malaysia, Mr. Mr. Goh Seng Chai: The world's expectations are high. We must support Vietnamese Sangha to do their best. I am quite happy with the preparations so far. The government's support has been very encouraging. There is huge participation from all level at all fronts."

Thousands of people including international delegates from more than 70 countries are expected to participate in the Hanoi historic Vesak celebrations. It's a landmark moment for the Vietnamese Buddhists and the government as the whole world looks towards the UN Vesak Celebrations in Vietnam with high expectations.

Master Nhat Tu assures with his benign smile: "The task is mammoth and challenging, no doubt. But we are dedicated and determined in the guidance of Lord Buddha to make the celebrations a great success. We are working day and night, remembering well that nothing great ever came easy.