Ho Chi Minh City, Vietnam -- Despite being situated in a crowded residential area, Giac Lam Pagoda is an oasis of tranquillity. 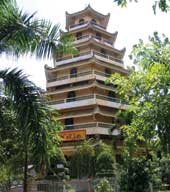 It also retains the majesty of an ancient pagoda thanks to its large, tree-filled precinct and monks’ efforts to preserve its traditional look.

Formerly called the Son Can or Cam Dem, this national historical and cultural relic – as recognised by the Government in 1988 – was built in the mid-18th century.

It is situated in Tan Binh District’s Lac Long Quan Street in the Phu Tho Hoa area, which used to be Cam Dem or Son Can Hill. It was built by Ly Thuy Long, a lay-Buddhist of Chinese origin who collected gifts from various donors to construct a thatched-roof wooden pagoda in the Giap Ty Year (1744) when the area was ruled by Lord Nguyen Phuc Khoat.

In the Gia Dinh Province Records maintained by Governor Trinh Hoai Duc of the Gia Dinh Citadel, the area is described as "a 3ha lot covered with tall trees and wild flowers".

Many trees remain, some of them very old and tall. The pagoda is rather modest-sized and with the typical architectural features of ancient southern pagodas.

The large compound is enclosed by walls that separate it from the crowded streets outside. A two-tier gate, a prominent feature of the garden-pagoda architectural style, leads into the lane leading to the yard. Inside are western decorations like square pillars and lions, lotuses and Nagar snakes inspired by Indian and Khmer cultures.

The strongest symbol of Vietnamese culture is a terracotta vase made in Song Be and placed at the topmost point in the compound.

The pagoda is also surrounded by five ancient towers with ingenious sculptural lines. Its yard is paved with red square tiles. Both sides of the path are covered in precious ornamental flowers and plants.

In front of the pagoda is a giant bodhi tree, a gift from the Venerable Elder Narada, who came from Sri Lanka in 1953. Under it is the statue of Guan Yin Bodhisattva. On one side of the pagoda is a 100-year-old white-flower ochna tree.

The main pagoda’s structure is in the traditional rectangular pattern. It is 65m long and 22m wide, and consists of three main buildings – the central hall, the preaching hall, and the refectory.

There are 98 wooden columns in all, many of which are so thick that adults cannot get their hands fully around them. On the columns are 86 "parallel sentences" inscribed in gilded Chinese calligraphy and bordered with elaborately wrought frames. All the rafter ends are shaped like the heads of dragons.

The main hall is adorned with solid altars made of valuable wood and three netlike panels. Among the 118 statues in the pagoda, 113 are made of bronze and gilded jackfruit wood. The Buddha Sakyamuni’s idol on the lotus throne is 0.65m high. Enshrined in the preaching hall is the oldest Sakyamuni statue dating back to the 18th century. The nine-dragon statue cast in bronze, which illustrates the story of the Buddha’s birth, is also enshrined in the main hall.

On the two sides of the walls are two sets of idols of Thap Bat La Han (The 18 Arhats) and a set of Thap Dien Diem Vuong (King of Hell).

All the statues, netlike panels, furniture, stupas, and tombs in the pagoda are exquisitely created.

The pagoda also has a seven-storey stupa which was completed in 1993. The 32-hexagon tower, with eaves and openings each enshrining the Buddha’s Telic from the Long Van Pagoda in Binh Thanh District. It is one of the most spectacular towers in the city.

The city has put pagodas built before 1900 in a list of ancient pagodas. Those built subsequently, even if they are in the traditional wood pattern, do not make that list.

Giac Lam not only tops that list but also retains the oldest architectural and decorative motifs seen in any pagoda in the city.