HANOI, Vietnam -- A Buddhist group banned in Vietnam has said police in the communist country have tried to evict its monks from a pagoda to use it for a UN-sponsored international Buddhist meeting this month. 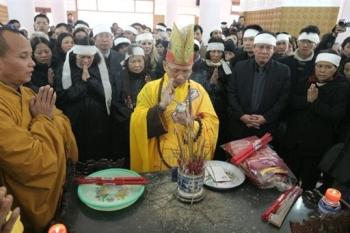 The state-sponsored Vietnam Buddhist Sangha (VBS) on May 13-17 hosts the 5th United Nations Day of the Vesak, an event expected to draw thousands of followers and scholars from 70 to 100 countries, according to organisers.

The Unified Buddhist Church of Vietnam (UBCV), which is outlawed but still runs scores of pagodas here, has said its members have been harassed and threatened by authorities seeking to bring them under state control.

The UBCV claims police and state officials on April 29 broke the locks of the group's Giac Hai pagoda in southern Lam Dong province, claimed it for use during the UN Vesak events, and temporarily detained its monks.

"Police interrogated the two monks for over three hours, accusing them of belonging to an 'illegal organisation,' engaging in 'political activities' and 'disturbing public order'," said a UBCV statement issued in Paris on Saturday.

The group said the pagoda's head monk Thich Tri Khai had been singled out in a "state-orchestrated policy of repression" against the UBCV, which is led by Thich Quang Do, winner of Norway's 2006 Rafto Foundation human rights award.

Police in Don Duong district, where the pagoda is located, could not immediately be reached for comment.