Hanoi, Vietnam -- The much awaited United Nations Day of Vesak celebrations in Vietnam which began today were an amazing spectacle of religious and ritual festivity at Hanoi, with thousands of Buddhists from the world over gathering at the Capital's National Convention Center to spread Buddha's message of peace, love and harmony. 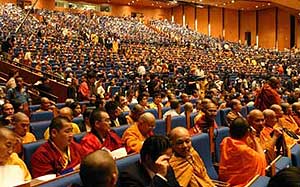 << The United Nations Day of Vesak celebrations in Vietnam

Over 600 Buddhist delegations consisting of about 5,000 representatives from 90 countries will meet during the three-day Conference, the biggest ever Buddhist international event in Buddhism's over 2000 year's long history in Vietnam.

"It's an historical event and moment of pride for the Buddhists and the whole country. The Vietnam's Buddhist community is obviously excited about it," said Venerable Dr. Thich Nhat Tu, secretary, International Organizing Committee of the United Nations Day of Vesak (UNDV).

The main theme of this year's UNDV Conference is "Buddhist Contribution to Building a Just, Democratic and Civil Society," with sub themes where Buddhism can make a world of difference are: climate change, family conflicts, war and healing, social change, Buddhist education, engaged Buddhism and Buddhism in the digital age.

World famous Zen master and scholar Thich Nhat Hanh has been holding a retreat of over 400 foreign delegates in Hanoi for last couple of weeks. Today, he spoke on the main theme of the Conference.

Venerable Professor Le Manh That, the chairman of UNDV in Vietnam said: "The event is an opportunity to apply the Buddhist perspective to solve a multitude of problems the world faces today."

The Buddhists see this event as an opportunity to spread the Buddha's message compassion and harmony throughout the world. This year's celebrations will commemorate the 2252nd Year of the Birth, Enlightenment and Passing Away of the Buddha Gautama.

It is also an international religious and cultural day that will promote interaction and exchange of Buddhist cultural values from diverse countries. Cultural activities will be organized not only in the capital Hanoi but also in other 55 cities and provinces.

Prominent among cultural activities would be Buddhist culture and arts exhibition, food fair and procession of well-lighted and beautifully decorated floats. Lanterns will be released on rivers and into the air.

On May 16 after the closing ceremony there would be a candlelight vigil praying for the World Peace with about 20,000 people participating. Balloons would be released in the air and specially designed postcards to commemorate the UNDV festivities will be distributed.

Ven Nhat Tu sums up the significance of the celebrations for humanity at large: "The celebrations are a reminder to the world about the teachings of the Buddha, and also a call that if Buddha's teachings of compassion, simple life and selfless service to society are followed, the life on earth would become a blessing."