New York, USA -- Members of the banned Unified Buddhist Church of Vietnam (UBCV) should be allowed to organize and attend funeral services for their patriarch without government interference, Human Rights Watch said today. 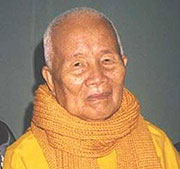 The Vietnamese government has announced that the state-sanctioned Buddhist church will organize the funeral for the UBCV Supreme Buddhist Patriarch, Thich Huyen Quang.

A Buddhist peace activist who opposed French colonial rule and the US war in Vietnam, Thich Huyen Quang was a lifelong champion of human rights and religious freedom in Vietnam. He passed away in a monastery in Binh Dinh province in central Vietnam on July 5, 2008, at the age of 88. As a member of the UBCV since the 1960s, which is banned by the Vietnamese government because of its refusal to join the state-sanctioned Vietnam Buddhist Church, Thich Huyen Quang spent much of the last three decades in government-imposed internal exile, house arrest, or prison.

“Thich Huyen Quang gave up his liberty for 30 years in a quest for greater human rights and religious freedom in Vietnam,” said Brad Adams, Asia director at Human Rights Watch. “His followers should be allowed to pay their last respects without government interference, at a ceremony of their own choosing.”

The UBCV plans to hold funeral services for Thich Huyen Quang on July 11 at Nguyen Thieu Monastery in Binh Dinh province. Thich Quang Do – the patriarch’s deputy, close associate, and likely successor – will preside over the ceremony. However, the Vietnamese government has already taken steps to wrest control over the funeral and the patriarch’s legacy by announcing that the proceedings will be organized by the state-sanctioned Vietnam Buddhist Church. Government-controlled media has run vitriolic denunciations of Thich Quang Do, accusing him and “extremist elements disguised as Buddhist monks” of plotting “devious schemes” to exploit the patriarch’s death for political purposes. On July 6 the state television station, VTV1, broadcast a statement saying: “Confronting the immoral actions of the Quang Do group, the students and disciples [of Thich Huyen Quang], as well as the genuine monks of Nguyen Thieu Monastery, have vehemently reacted and they are determined not to let the Quang Do group organize the funeral ceremonies.”

“The Vietnamese government is risking unnecessary confrontation with the patriarch’s followers by trying to control him in death as in life,” Adams said.

Thich Huyen Quang, who was nominated for the Nobel Peace Prize by two former laureates, became Supreme Patriarch of the UBCV in 1992. He joined the monkhood at the age of 12 and had a long history as a Buddhist activist. In the 1940s he participated in the resistance to French colonial rule as vice president of a regional section of the Buddhist Movement for National Salvation. In the 1960s he was a prominent Buddhist peace advocate during the Vietnam War and a critic of anti-Buddhist policies by the South Vietnamese government of President Ngo Dinh Diem.

After the reunification of Vietnam in 1975, Thich Huyen Quang became an outspoken advocate for democracy and human rights. Although the UBCV had opposed the war, the Hanoi government confiscated its property, jailed many of its leaders, and attempted to force it to merge into the state-created Vietnam Buddhist Church. Thich Huyen Quang was arrested in 1977 and again in 1982 for publicly calling on the government to recognize the UBCV and for protesting violations of religious freedom and human rights. In 1982 he was forced to leave his pagoda in Ho Chi Minh City and sent into internal exile at an isolated pagoda in Quang Ngai province.

Human Rights Watch expressed concerns about reports from Buddhist sources in Vietnam that police have been visiting pagodas in some areas, including Vung Tau-Ba Ria and Binh Dinh provinces, and ordering monks not to hold funeral ceremonies for Thich Huyen Quang.

The Vietnamese government’s interference during the UBCV’s last transfer of leadership after the death of UBCV Patriarch Thich Don Hau on May 3, 1992, sparked widespread protests by Vietnamese Buddhists. Thich Don Hau, the most senior UBCV monk still at liberty at the time of his death, had stipulated that his funeral was to strictly follow Buddhist tradition, without any official intervention. Upon his death, however, the government swiftly bestowed upon him the Ho Chi Minh Medal and set about organizing the funeral, despite hunger strikes and threats of self-immolation on the part of many monks. Thich Huyen Quang, who was under house arrest at the time, was permitted to attend the funeral only after a day-long hunger strike. He delivered an oration condemning the government’s attempt to dissolve the UBCV with the establishment of the state-controlled Vietnam Buddhist Church.