HANOI, Vietnam -- Dissident monk Thich Quang Do became the new leader of the banned Unified Buddhist Church of Vietnam (UBCV) Sunday, pledging to keep up the peaceful struggle for religious and political freedom. 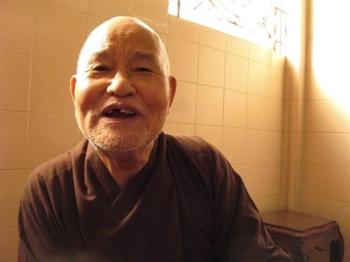 Do, the former deputy leader, was named supreme patriarch at a ceremony held in Houston, Texas marking 49 days since the death of his predecessor Thich Huyen Quang, the organisation said in a statement.

"We pledge to realise Patriarch (Quang's) wishes -- to promote human rights for the living, sacred rights for the dead and democracy for society," Do said in a recorded message, the UBCV said in a statement.

The 79-year-old Do , whom Quang named as his successor in his will, pledged that the leadership would "do its utmost to re-establish the legal status of the UBCV and maintain its historic tradition of independence."

The UBCV has refused to come under the control of the communist government that has ruled all of Vietnam since the end of the war in 1975, and has been effectively banned since the early 1980s.

Quang and Do spent most of the time since then in internal exile under "pagoda arrest" and isolated from each other.

The ceremony was held in the United States, not Vietnam, because police in the communist country had surrounded all key UBCV pagodas in recent days and restricted members from travelling, the group said.

"Unable to hold the ceremony in Vietnam, UBCV leaders finally decided to smuggle a copy of the testament to Houston, Texas, where a parallel memorial ceremony is being held by the Overseas UBCV," the group said.

Despite having been kept under house arrest for much of the time, Do was able to lead Quang's July 11 funeral service, which brought thousands of followers to a central province and went off without incident.

Authorities, under international pressure, allowed the event to go ahead despite having earlier attacked UBCV followers as "extremist elements disguised as Buddhist monks" in the state-controlled media.

In Paris, UBCV spokesman Vo Van Ai said on Sunday that "the appointment of Most Venerable Thich Quang Do as UBCV leader marks the beginning of a new phase in relations between the government and the UBCV."

Quang's death and the conflict over his funeral "underscore the strong international support enjoyed by the UBCV," he said.

Ai added that "Hanoi should cease treating the UBCV as its enemy and seize this occasion to recognise the leadership of Thich Quang Do and re-establish the legitimate status of the Unified Buddhist Church of Vietnam."